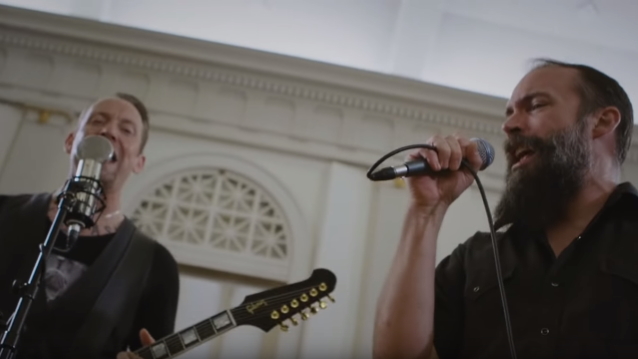 Danish/American rock and rollers VOLBEAT have released a music video for the song "Die To Live", directed by Adam Rothlein at Ghost Atomic Pictures and taped at Futura Studio in Roslindale, Massachusetts. The song and video both feature appearances by CLUTCH's lead singer Neil Fallon, as well as Raynier Jacob Jacildo and Doug Corcoran of JD McPherson's band.

Said Fallon about taping the video: "A couple of months ago, I flew up to Boston to meet up with VOLBEAT to film the video for their new single, 'Die To Live'. It was a breeze to make, maybe four hours. It's a catchy straight-ahead rocker of a song and I am flattered to have been asked to participate." Michael Poulsen, lead singer of VOLBEAT, added: "We were thrilled to be able to get Neil, Raynier and Doug together with us in the same room to shoot this video, and we're really proud of how it came out. We hope you have as much fun watching it as we did making it!"

The second leg of VOLBEAT's "Rewind, Rebound, Replay" world tour began this past Wednesday in Warsaw, and fans who attended last night's show at Berlin's Mercedes Benz Arena got an early first look at the video. The band will close out 2019 with sold-out shows across Europe, and have recently announced new dates in early 2020.

VOLBEAT recently released its seventh studio album, "Rewind, Replay, Rebound". The effort is available on all formats, including a two-CD deluxe edition, a special deluxe edition box set, and transparent and blue colored vinyl, numbered and limited to 1,000 copies each.

VOLBEAT emerged from Copenhagen in 2001. Since then, they've tirelessly clawed their way to hard rock's upper echelon with endless touring and a string of six beloved full-length albums, including the RIAA-gold-certified "Beyond Hell/Above Heaven".