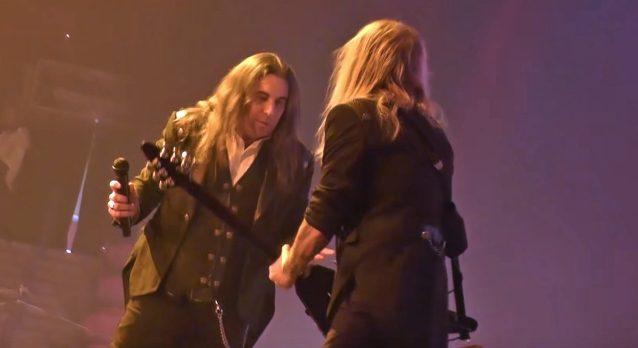 Ever since TRANS-SIBERIAN ORCHESTRA embarked on their first tour — a modest seven-show run of theaters in the Northeast and Midwest — in 1999, the group's lineup has featured four members of SAVATAGE, the pioneering metal group from which TSO spawned: bassist Johnny Lee Middleton, drummer Jeff Plate and guitarists Al Pitrelli and Chris Caffery.

Two decades and hundreds of sold-out arena shows later, all four musicians still tour with the band each winter, albeit as members of different touring troupes — Pitrelli and Middleton are the longtime anchors of "TSO West," while Plate and Caffery are stalwarts of "TSO East." In 2015, vocalist Zachary Stevens — who fronted SAVATAGE from 1993 to 1999 and performed with the group that year during their one-off reunion show at Germany's Wacken Open Air festival – began touring with TSO East as well.

This year's TSO tour, which kicked off on November 14, sees the group nod prominently to its SAVATAGE origins. In addition to performing the instrumental "Christmas Eve (Sarajevo 12/24)" — a song originally recorded by SAVATAGE for their 1995 rock opera "Dead Winter Dead" — TSO has also added SAVATAGE's "Chance" to its concert setlists. Fan-filmed footage of both TSO troupes performing the song live can be seen below.

"Chance" originally appeared on SAVATAGE's 1994 album "Handful Of Rain", the group's first album after the death of guitarist Criss Oliva (brother of SAVATAGE co-founder and original vocalist Jon Oliva). It marked the band's first usage of counterpoint vocals, which they later utilized on songs such as "One Child", "Morphine Child" and "The Hourglass" (and which would also become a trademark of TSO albums). The song's lyrics — written by the group's late producer, Paul O'Neill — were inspired by the life of Chiune Sugihara, a Japanese diplomat in Lithuania during World War II who defied government orders by signing exit visas for thousands of Jewish refugees who otherwise would have been sent to concentration camps.

In a 2007 interview with Sea Of Tranquillity, Jon Oliva acknowledged the impact of the song. "I think 'Chance' is a great, great song," he said, "and I think it was the start of what TSO would eventually be doing, so that was our first dabble in symphonic, orchestrated rock."