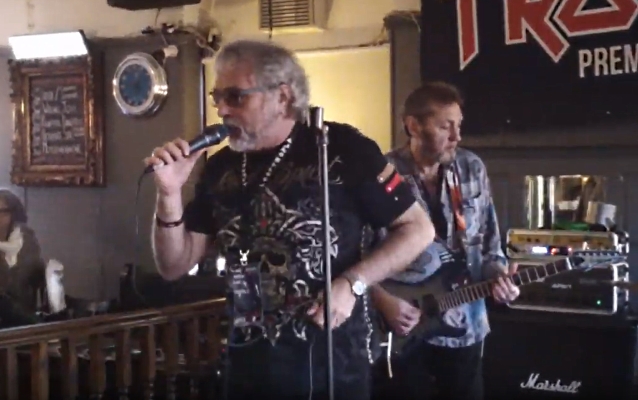 Last month, four-fifths of the original IRON MAIDEN lineup reunited for the first time in 42 years. Bassist Steve Harris, who formed IRON MAIDEN on Christmas day in 1975, was photographed with Paul Mario Day, and Sullivan and Rance. Missing from the photo op was drummer Ron "Rebel" Matthews.

Day's latest face-to-face meeting with Harris came four years after the singer suggested in an online post that he had co-written the MAIDEN song "Strange World" but was never credited for his contributions.

Day wrote at the time: "This is my opinion. When I sang in IRON MAIDEN, it was a new pub band and nobody wanted to see or hear them. We were all nobodys all trying to make the best music we could and fighting for an audience.

"In 1976, photos/recording were next to impossible to have if you were poor boys from East London, so I cannot prove I wrote the words and melody for 'Strange World'.

"As for before the time of albums and recording deals, I would say it was creative theft, not deliberate, as probably I would have done the same thing myself to keep it clean and simple. I think, however, if it made me a mega amount of money in the future, I would have done the right thing and [made] amends. As back then we were all pulling for the same side and it still hurts to think the first-ever song I ever composed was on a big-selling album and nobody knows it was me. Not to mention how I scrape to earn a living while Mr. Harris is living like a god!"

Due to his lack of stage presence, Day was replaced in MAIDEN by Dennis Wilcock. Day went on to front SWEET and MORE while Terry Rance still plays with AIRFORCE, which features former IRON MAIDEN drummer Doug Sampson.