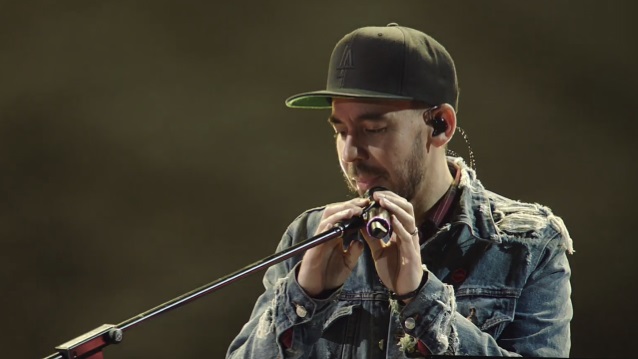 LINKIN PARK's tribute concert to the band's late frontman Chester Bennington was live streamed for free via YouTube and can now be seen in its entirety below. The performance itself took place Friday night (October 27) at the Hollywood Bowl in Los Angeles and saw LINKIN PARK return to the stage for the first time since Bennington took his own life this past July.

Proceeds from the concert, which was billed as "Linkin Park And Friends Celebrate Life In Honor Of Chester Bennington", will go to Music For Relief's One More Light Fund in memory of Bennington.

Among the artists that appeared at the show were Jonathan Davis of KORN, Oliver Sykes from BRING ME THE HORIZON, M. Shadows and Synyster Gates from AVENGED SEVENFOLD, all the members of SYSTEM OF A DOWN except Serj Tankian, members of BLINK-182, Machine Gun Kelly, ex-YELLOWCARD singer Ryan Key, pop singer and LINKIN PARK collaborator Kiiara and more.

One of the most memorable moments of the evening was a spine-tingling rendition of LINKIN PARK's 2001 track "In The End", which saw the band encourage fans to sing Bennington's vocal part.

Prior to playing the track, LINKIN PARK's Mike Shinoda addressed the crowd. "Our special guest on this one is our favorite special guest of the whole night," he said. "And that's fucked up to say because of all these great people that have come out tonight, and if I say that, then that makes them look bad. But I do mean our favorite guests — it's you guys."

A speech from Chester's wife Talinda followed the song. She said: "What an incredible show this has been. Chester and I always loved bringing people together and he was filled with joy when our house was full of family, friends, kids, dogs, cats, birds, turtles — the more the merrier. And he would have loved all of this tonight." She went on to thank her late husband, management, family members, the band and fans across the world for their support, saying: "And to you LINKIN PARK's fans, thank you. Chester always said LINKIN PARK fans were the best, and you know what? He was absolutely fucking right. In the past fourteen weeks, you have lifted each other up. You have lifted me up. You have lifted our children up. From memorials around the world to supporting every day as our family on Twitter, and spreading the love with the hashtags #MakeChesterproud and #fuckdepression."

She continued: "Two of the things that brought Chester the most joy in life were spending time with his family and doing whatever he could to help others. He was incredibly proud of the work done through Music For Relief — he knew it saved lives. And saving lives is exactly what we plan to do in Chester's memory.

"It is time we recognize that mental health is as important as our physical health. It is my mission to make it easier to have access to mental health resources."

Bennington was found dead on July 20 after committing suicide at his home in Palo Verdes Estates, California. 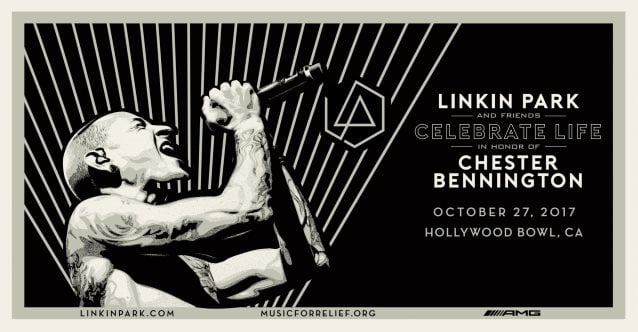