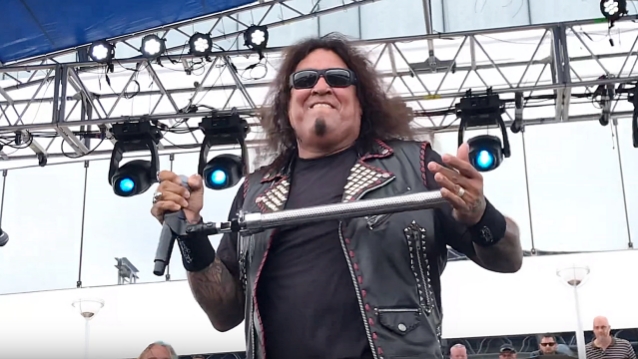 Fan-filmed video footage of TESTAMENT's performance aboard the inaugural Megacruise can be seen below (courtesy of Alex Vigil).

Megacruise, hosted by metal veterans MEGADETH, departed from Los Angeles on October 13 on a round-trip voyage to San Diego and Ensenada, Mexico.

TESTAMENT frontman Chuck Billy recently confirmed to DJ Valentino of the WSOU radio station that the band has completed work on the follow-up to 2016's "Brotherhood Of The Snake" album. Asked if the plan is still to release the new LP in January, Billy said: "That's the window. We're still talking with [TESTAMENT's record label] Nuclear Blast [about] the exact date. But I think now they're leaning towards end of February, beginning of March. So it's probably looking like that. But it's all done. We just finished the mastering this week and [we're] finishing up all the artwork in the next couple of weeks. The label should have all the parts. And it's a matter of just kind of waiting then."

As for the musical direction of the new TESTAMENT album, Billy said: "This one definitely has some different elements. I think Eric [Peterson, guitar] definitely stepped back into little of his — I don't know — maybe, MERCYFUL FATE shoes. There's a lot of MERCYFUL FATE kind of stuff. Eric does some black metal stuff. There's some blast beats, which he's kind of mixed in there, which that's not the norm for us. So it's a little different again. I think all the songs definitely have their own identity and stand on their own."

According to Chuck, the writing process for TESTAMENT's new album was challenging but it resulted in moments that some of the band's fans may find musically surprising.

"It definitely was a process of creating it, especially when you're trying to — at this point, you're writing song 120," he laughed. "You're trying to come up with something and keeping it fresh and trying new things. I guess the good thing on this one is also Eric actually chose some chords and notes that aren't typical TESTAMENT, I guess, that we've used, so they're actually different and more challenging for me. And when I first actually heard them, I was kind of, like, 'I don't if I feel that.' And I kind of shied away from it. Then, as the process developed and I really kind of focused on the song, it ended up being those songs that ended up being some of the better songs and stronger songs. And it's just so weird — the ones that were easier and came together quicker [laughs] now aren't my favorites. So it's just kind of weird, the whole process of writing a record. And this one, again, was no different than the last one. [It's got] a different vibe."

Asked if it's more difficult than ever to trying to come up with something fresh when writing a new TESTAMENT album, Chuck said: "I vibe off of Eric, what he gives me, and I basically set the tempo, if it's gonna feel like a melodic vocal song or a death metal vocal song or just straight death — I kind of see where it's gonna lead me, I guess, as we approach each song as they come. And a lot of this one had a lot more moving chords on it to where it made me feel a little more, I guess, melodic on this one; I'm using definitely my melodic tone of a voice and less of a death metal voice. It's just kind of where the songs took it. There's a song on here that was kind of one of the last ones that came around — it's one of the slower-tempo songs. And I kind of was shying away from it 'cause the pace of the rest of the record was pretty quick, so I wasn't sure it was the right fit. But in the end, once we wrote it and finished it, it turned out to be a great song. But I'm doing some stuff on there — I've never sang a three-part harmony on a TESTAMENT song ever. And on this one, there's a situation where I tried it and did it, and it sounds really cool for the song. So it was just something different — challenging again that was different notes to use and different challenges, and I kind of dug it. And it actually was cool, and it actually made the experience on those songs, of creation, just kind of fun."