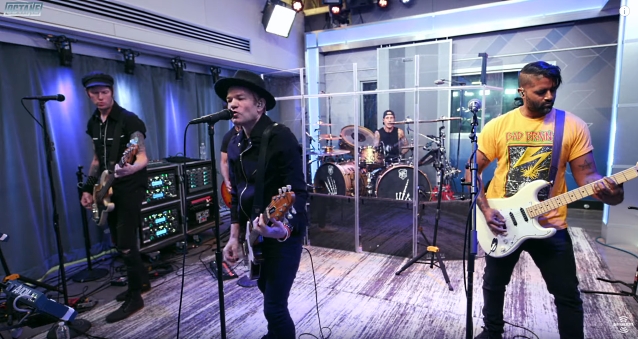 Video of the five-minute medley, consisting of the songs "For Whom The Bell Tolls", "Enter Sandman" and "Master Of Puppets", can be seen below.

In a 2017 interview with No Future, SUM 41 frontman Deryck Whibley professed his love for METALLICA, saying: "They just have such great melodies, even though they're tough and they're hard and heavy. They're like THE BEATLES of metal; they write really catchy songs."

Earlier this month, SUM 41 released a music video for the song "45 (A Matter of Time)" . The track joins previously released singles "Out For Blood", "Never There" and "A Death In The Family" from SUM 41's new album, "Order In Decline", which is due out July 19 via Hopeless Records.

"Order In Decline" was produced, engineered and mixed by Whibley in his home studio. He is joined on the record by lead guitarist/backing vocalist Dave Brownsound, guitarist Tom Thacker and the rhythm section of bassist/backing vocalist Cone McCaslin and drummer Frank Zummo.

SUM 41 is co-headlining the inaugural Rockstar Energy Drink Disrupt Festival this summer on select dates throughout the United States and Canada.