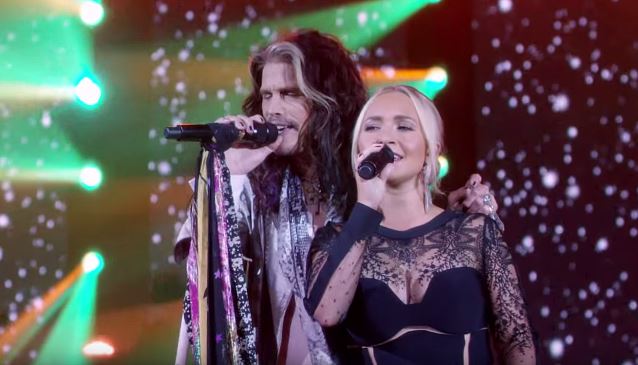 AEROSMITH frontman Steven Tyler was a guest on the season four premiere of ABC's "Nashville" last night, appearing as himself and covering Patsy Cline's "Crazy" with Hayden Panettiere, who plays Juliette Barnes on the popular television show.

Video footage of Tyler's appearance on "Nashville" can be seen below.

The single version of the track is available via iTunes.

Steven released his debut country single, "Love Is Your Name", in May, and currently working on a full-length album. He told Rolling Stone Country: "This is a side project, which has now turned into a love of life. I think we got something here that the radio would love to play."

The "Love Is Your Name" clip was filmed just outside Nashville and was previewed on ABC's "Good Morning America" before it went live online. The track was written by Lindsey Lee and Eric Paslay.