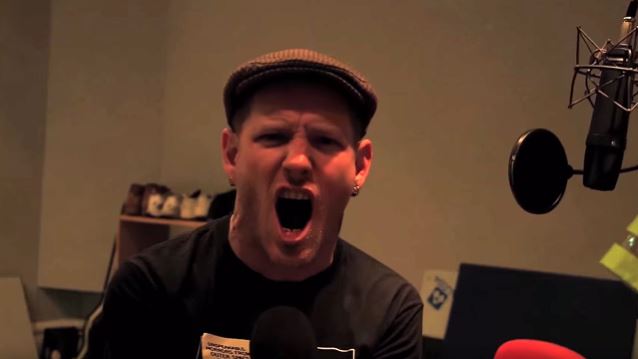 SLIPKNOT and STONE SOUR frontman Corey Taylor was tapped by the producers of "Doctor Who" to lend his "deep and terrifying roar to the alien warlord known as Fisher King" in the October 10 episode of the BBC television series.

Behind-the-scenes footage of Taylor on the set of the show can be seen below.

Asked how his involvement with the program came about, Taylor told U.K.'s Kerrang! magazine: "Dude... So, what happened was, while we were on tour with KORN [earlier this year], we were approached about doing the tour of the Doctor Who Experience [the BBC's thrilling family attraction in Cardiff], and I was asked whether I would be interested in doing something for the show. And I freaked the fuck out."

Speaking about his first early memories of "Doctor Who", Taylor told Kerrang!: "The beautiful thing about 'Doctor Who' is that everyone has their Doctor, and mine was Tom Baker. I can remember this crazy show where this guy in a beautifully long scarf was running around and saving the world and shit. It was so quirky, and yet so sci-fi and so good that you just couldn't help but get into it. A lot of people talk about the older stuff and how it doesn't age well — but that's kind of the point. It was a shoestring budget, but a huge world that you could sink your teeth into."