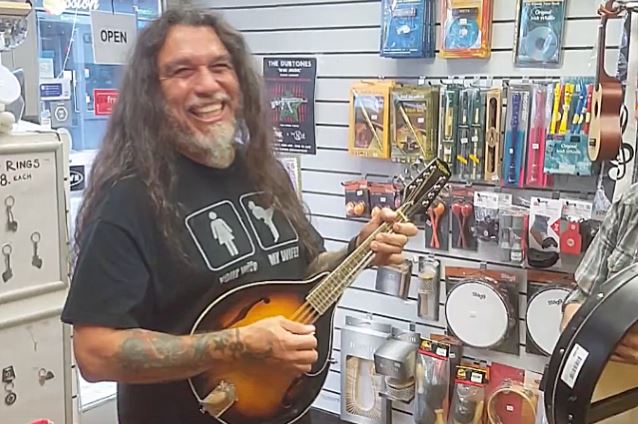 SLAYER frontman Tom Araya decided to drop by Music Minds in Dublin, Ireland during the band's current European tour to see if he could find a new musical instrument to jam on. After much deliberation, he settled on a mandolin.

Music Minds' owner said: "I think you can agree [Tom] has found his true calling in music. Irish jigs will never sound the same to us again.

"Thanks so much for buying from my store and making my staff's day.

Earlier this year, Araya told The Charlotte Observer about some people's tendency to stop listening to metal when they get older: "I don't like hearing that people outgrow music. I come across a lot of fans. When they find out who I am, because people will recognize me, they'll say, 'I used to listen to you,' and they will name off earlier records. I'll just look at them and say, 'What do you mean used to?' They say, 'I'm older. I got kids.'

"You're never too old to listen to any kind of music. I frown. 'You're making yourself older than you really are.'"

He continued: "[My] kids growing up had to listen to whatever music we listened to. They've grown up liking the music we play, '60s bands, heavy stuff, country. Now that they're older [19 and 16], they have a preference, but they can enjoy other [styles of] music. People create these generation gaps [when they] don't let the kids listen to what they listen to."

Asked what his kids listen to, Araya said: "My son gravitated toward heavier-edged music. My daughter gravitated toward not-so-heavy music. She likes all the TWENTY ONE PILOTS, FALL OUT BOY, PANIC AT THE DISCO. My son likes VAN HALEN, all the heavier stuff."