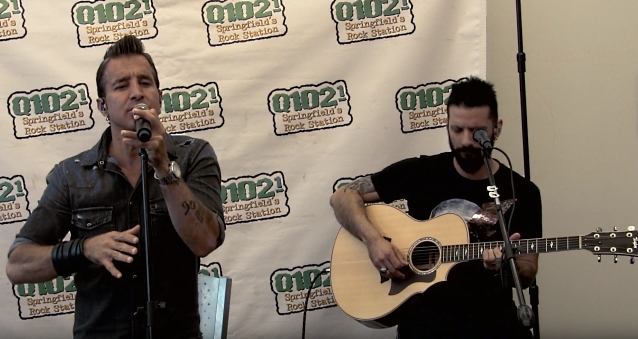 Grammy-winning songwriter, powerhouse frontman for CREED, and platinum-certified solo artist Scott Stapp dropped by the studios of Springfield, Missouri's Q102 radio station on his national tour to perform a special acoustic version of his new single, "Purpose For Pain". Video footage of his appearance can be seen below.

"Purpose For Pain" is taken from Stapp's upcoming album, "The Space Between The Shadows", due on July 19 via Napalm Records.

"It's a bangin' rock track," Stapp iHeartRadio heritage rock station WJRR about the song. "I kind of went in some slightly new directions musically and vocally. It's a song, I think, that really was inspired about times that have been difficult in my life and how I got through it, 'cause I get asked that a lot. And for me, during those difficult times, those painful times in life, I found that if I began to think about the other side — like, 'When this is over, how can I use this experience to help somebody else?' That became my purpose in that moment. So although I was still feeling the pain and still enduring whatever struggle or adversity or traumatic life experience that we all go through at times, not getting sucked in completely to the pain, but changing my mindset to, 'You know what? I'm gonna get through this and I'm gonna learn something so I can help somebody else when I get to the other side.' That was just enough hope to get me through some of the darkest days, man, and so it ended up becoming a song."

Stapp went on to say that a long time passed before he was able to develop a more positive mental attitude while he was battling his demons. "It took me years before that became a mindset, so there was years of doing it the wrong way," he explained. "And so it was kind of an epiphany that happened, and also other people sharing their experience and strength and hope with me. And I think [AEROSMITH singer] Steven Tyler was really the first person to kind of put that seed in my mind back in 2010, but it didn't really blossom and I didn't really fully understand what he was talking about until years later. He reached out to me when I was going through a tough time and shared his experience and stayed in touch with me for probably a month. We spoke five or six times over the phone, and he was really encouraging, and in reflection, he kind of put that in my brain, but I didn't hear it — I wasn't ready. And so years later, it finally clicked, and it's really been a game changer for me in my life and inspired this new song."