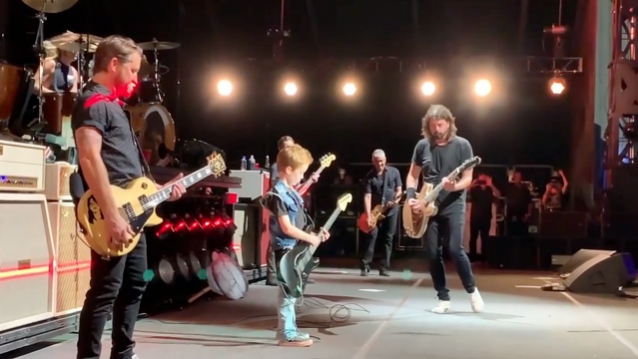 Revel Young Ian, the eight-year-old son of ANTHRAX guitarist Scott Ian, joined the FOO FIGHTERS on stage this past Friday, September 20 at the Bourbon & Beyond festival in Louisville, Kentucky to perform "Everlong" on guitar.

Scott shared video footage of the performance on his Instagram, writing in an accompanying message: "Proudest dad moment ever? How about when your son gets to join his favorite band on stage to play Everlong in front of 40,000 people and NAILS IT! Thank you Dave, Taylor, Pat, Nate, Chris, Rami, Gus, Kerwin, Sean, Patrick, Simone and everyone else on the Foo crew for being the best!!! @foofighters @gusbrandt @pearlcaliforniacountry @bourbonandbeyond"

Back in 2014, Ian told Horns Up Rocks that his then-three-old son was a big fan of METALLICA, THE BEATLES and AC/DC and that he could already tell the difference between Bon Scott's voice and that of Brian Johnson.

"He knows a lot of the stuff that he hears or sees in the house," Scott said at the time. "But what's really cool is that he actually recognizes and knows the difference between Bon Scott and Brian Johnson, which is pretty cool, I think, for an almost three-year-old. Anytime AC/DC is on, he'll go, 'That's Bon singing.' And then when it's not Bon, he'll say, 'That's not Bon singing.' He knows. That's pretty cool, I think."

Asked whether metal musicians should be parents, Ian said it was the best thing that had ever happened to him. He added: "I think you have to take that on a case-by-case basis. I couldn't say enough about having a child; I think it's the greatest thing ever in the whole world. But I do think that there are a lot of people on this planet, not necessarily metal musicians, that shouldn't be parents."


Proudest dad moment ever? How about when your son gets to join his favorite band on stage to play Everlong in front of 40,000 people and NAILS IT! Thank you Dave, Taylor, Pat, Nate, Chris, Rami, Gus, Kerwin, Sean, Patrick, Simone and everyone else on the Foo crew for being the best!!! @foofighters @gusbrandt @pearlcaliforniacountry @bourbonandbeyond