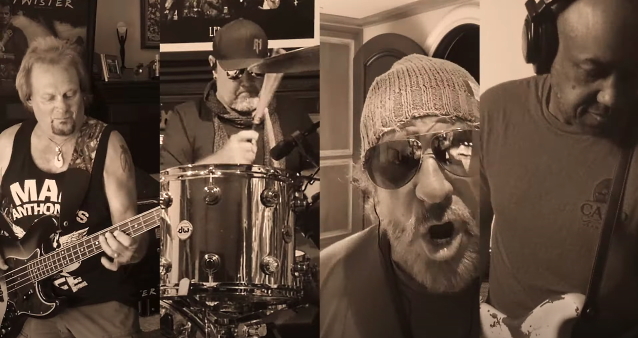 After previously connecting via their smartphones from four separate locations to lay down a brand new song titled "Funky Feng Shui", as well as covers of THE WHO's iconic track "Won't Get Fooled Again", VAN HALEN's "Good Enough", BOB MARLEY & THE WAILERS' "Three Little Birds" and AC/DC's "Whole Lotta Rosie", among others, they have now regrouped — in a virtual sense — to cover Little Richard's 1957 classic "Keep A-Knockin'". Check out video of the performance below.

Hagar said: "I had the hardest time with this one because every time I came in singing, I started singing LED ZEPPELIN's 'Rock 'n' Roll'! It took me three damn takes. My favorite drummer and my favorite singer of all time — love this one hope you do too. Long live the music of John Bonham and Little Richard!"

Last week, SAMMY HAGAR & THE CIRCLE's previously announced U.S. tour with NIGHT RANGER has been officially canceled due to the coronavirus pandemic which is sweeping the globe.