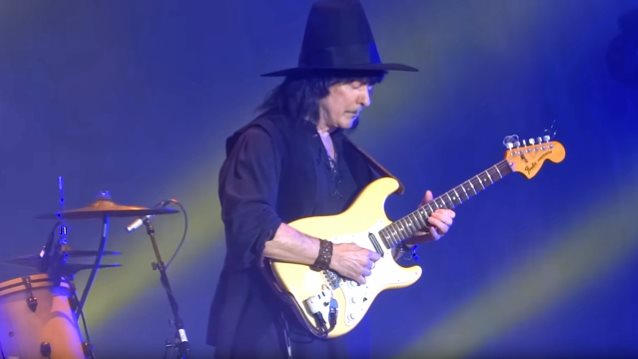 Fan-filmed video footage of the concert is available below.

The new RAINBOW lineup made its live debut on Friday, June 17 at the Monsters Of Rock festival at Freilichtbühne in Loreley, Germany.

Ritchie spoke to Dutch magazine Aardschok about his decision to enlist a new group of musicians to help him perform RAINBOW and DEEP PURPLE classics at three European shows this summer. Asked why he chose not to hire a "more famous" vocalist, Blackmore said: "The whole idea was to find good musicians. Of course, there were many familiar names around, but this idea didn't appeal to me. Unlike many others, I prefer to discover new musicians who can add a fresh approach to my music. It's great to present new musicians to the public."

He continued: "The singer Ronnie Romero is complete unknown. He's 34 and I'm sure that he'll have a great career in this scene. He is orginally from Chile, but lives in Spain. Bassist Bob Nouveau is from Connecticut, and Jens is a known and respected keyboard player. It's very easy to work with him, because he's so experienced.

"With drummers, I always tend to be very selective. For instance, I do not like to work with showmen. On stage, I need a groove and a lot of these so-called 'famous' drummers often rely more on the show element than on feel. I know many guys who can make their sticks fly and use sixteen bass drums, but who are mediocre when it comes to music. David Keith, however, has a great feel for rhythm."

Blackmore also talked about the renewed interest in classic rock and the media hype surrounding his return to rock. He said: "I never think about how good or bad things are going in a group. I'm just trying to create music of a high-quality standard. My music never really got into the charts. I think the most important thing is to believe in yourself. I think that RAINBOW made some memorable albums, which aren't less appreciated than any DEEP PURPLE album. Both groups were advanced for their time.

"The nostalgia aspect certainly has a role in the upcoming shows. Some people will use this project to check if I can still do it, while others will probably see it as an opportunity to see me on a bigger stage once again."

He added: "I don't want to sound morbid, but I do believe that thoughts like these come with the age that I have. I turned 70 and that has its disadvantages. Having a sore back or stiff fingers on stage is no fun. However, all this comes totally from myself.

"There were moments, a few years ago, when I thought of how much fun it would be to play some of the old songs again. However, the longer I thought about it the less appealing it all became. It was not until I found out about Ronnie that the whole idea came back again and when I started realizing the idea. He has a great voice and his fresh input is what gave me the final push. I am quite demanding when it comes to singers, but with Ronnie is absolutely feels good. This guy has a great future in the scene. He sounds like a perfect fit for this job because he has a voice that reminds of [Ronnie James] Dio but is versatile enough to also handle the [Ian] Gillan songs well."

Regarding the song selection for the summer shows, Blackmore said: "The setlist will be RAINBOW songs for about 70 percent, including 'Stargazer', because apparently that's a song everybody wants to hear. About 30 percent will be DEEP PURPLE songs. We will focus on the best-known songs. The Dio era will be a central part of the show, but we will also play songs from the Joe Lynn Turner and Graham Bonnet periods. As far as PURPLE is concerned; we will play the Gillan era but will also play something from the David Coverdale period."

Blackmore also addressed the possibility of further shows being announced if the upcoming dates go well. He said: "I deliberately chose to only give three concerts, to see if I'm still able to do this. Of course, there have been a lot of attractive offers, especially from Sweden and Finland. However, we must remember that I have already planned a German tour for BLACKMORE'S NIGHT in July. As you know, after I suspended the activities of RAINBOW, I became very interested in playing renaissance music. To move back to the electrics from the acoustics won't be easy. I've rarely played rock music in the last years, and before these shows I have to cut my nails short. Because when I play this other music, I need long nails. Five days after the last RAINBOW show, there'll already be the first BLACKMORE'S NIGHT show, so it's unclear if I will have enough time to grow my nails back. If it won't work so fast, I have to rely on false plastic nails. I never had this problem before, but I'm glad that I can [do something to] help me out."

He went on to say: "If we enjoy ourselves and the audience gives us a positive vibe back, then I won't rule out the possibility of continuing. However, the second round of dates will probably take place in 2017. But the crucial factor will be the chemistry between the musicians and the audience reaction. These shows will be recorded on video, so that we can release it later on. But my heart will always belong to renaissance music."

Blackmore will perform RAINBOW and DEEP PURPLE material at one more show this month.. The U.K. concert will be held on Saturday, June 25 at the Genting Arena in Birmingham. 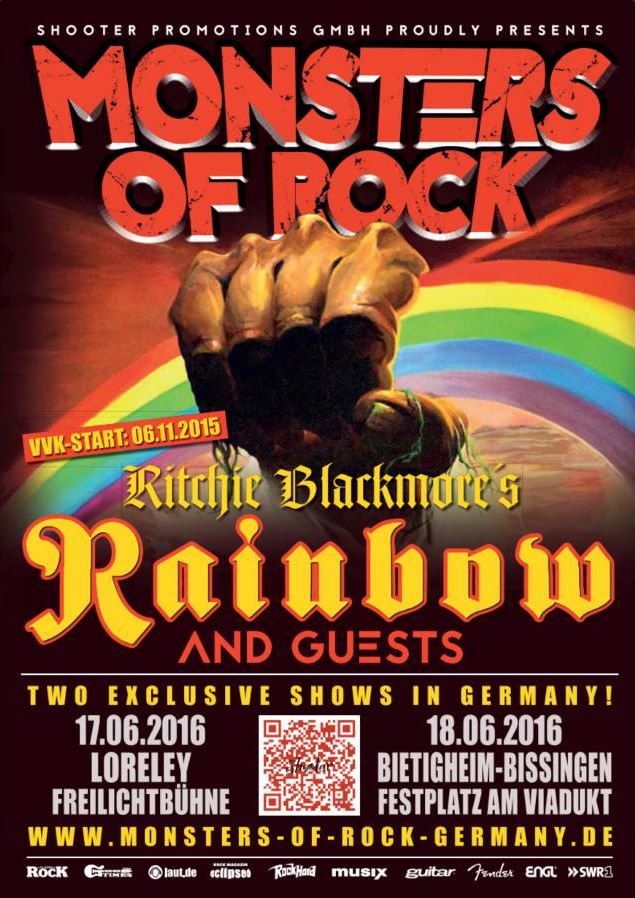