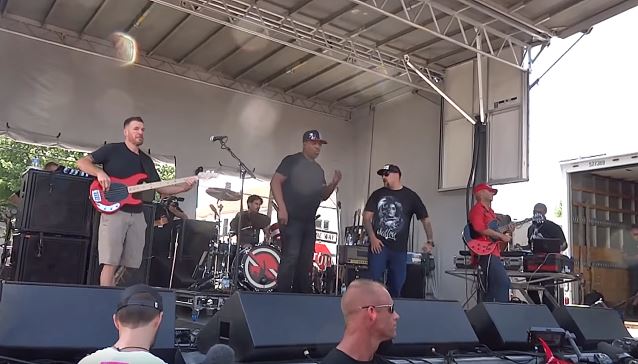 PROPHETS OF RAGE, the supergroup featuring members of RAGE AGAINST THE MACHINE, PUBLIC ENEMY's Chuck D and CYPRESS HILL's B-Real, played at the "End Poverty Now: March For Economic Justice" rally on Monday, July 18, the opening day of the Republican Nation Convention, in Cleveland, Ohio.

Four hours later, the PROPHETS OF RAGE played another impromptu concert, this time at the Cleveland Public Square, less than half a mile away from the Quicken Loans Arena, where the Republican National Convention was underway.

After the performance, Morello told reporters: "We're not here to bring Donald Trump a message. We're here to put wind in the sails of the people standing up against his message."

"In this election year where I've heard so many commentators say that Donald Trump, Bernie Sanders are raging against the machine, the architects of the real RAGE AGAINST THE MACHINE had to step up and say, 'We're gonna show you how to do it right,'" Morello previously told CNN.

Even though PROPHETS OF RAGE does not feature RAGE AGAINST THE MACHINE frontman Zack de la Rocha, the group plays classics like "Bulls On Parade" and "Killing In The Name" along with tunes by PUBLIC ENEMY and CYPRESS HILL.

"I think the music of RAGE AGAINST THE MACHINE is more relevant today than it was when it was written," Morello told Cleveland.com. "And we give a lot of credit and honor to Zack at every show because his lyrics are brilliant."

Earlier on Monday, PROPHETS OF RAGE released a single, "Prophets Of Rage", through digital download and streaming services. A re-imagination of the original PUBLIC ENEMY song of the same name, with new music and a new original verse from B-Real, the song gave life to the band's name. The single was recorded with legendary producer Brendan O'Brien who has done notable work with RAGE AGAINST THE MACHINE and AUDIOSLAVE.

On Tuesday, PROPHETS OF RAGE will perform a "proper" Cleveland gig at the city's Agora Ballroom. Following that, the group will embark on a national North American tour. The "Make America Rage Again" trek will include stops in Montreal, Brooklyn, Quebec City, Los Angeles, Chicago, Nashville and Atlanta before concluding in San Diego, mere weeks before 2016 Election Day. A portion of the proceeds from each show will benefit a local homeless charity.