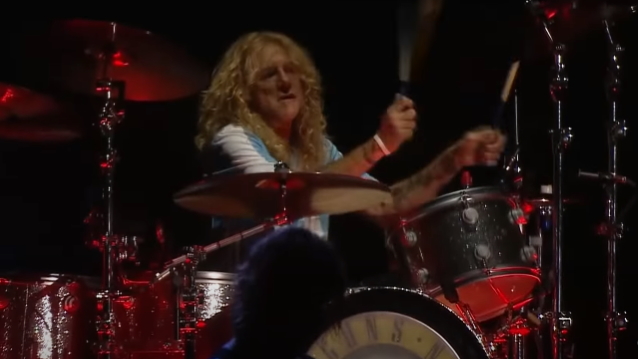 GUNS N' ROSES has released a compilation of professionally filmed performance clips filmed during the band's fall 2016 tour of South America and Mexico. The 47-minute video is part of the GN'R web series dubbed "Not In This Lifetime Selects" featuring highlights from the four-year "Not In This Lifetime" tour. Among the featured songs is "My Michelle", recorded on November 5, 2016 at River Plate Stadium in Buenos Aires, Argentina, with a guest appearance by the band's classic-lineup drummer Steven Adler. The previous night (November 4, 2016), Adler played "Out Ta Get Me" with the group at the same venue, although that video is not included in this compilation.

During the 2016 U.S. leg of GN'R's "Not In This Lifetime" tour, Adler played "Out Ta Get Me" and "My Michelle" on three separate occasions. Those shows marked Adler's first appearances with GUNS N' ROSES since 1990, although he performed with members of the band at their 2012 induction into the Rock And Roll Hall Of Fame.

Until he performed with the group on the summer 2016 tour, speculation about Adler having some sort of involvement in the GUNS N' ROSES reunion had been rampant ever since the band made it official with a surprise April 1, 2016 show at The Troubadour in Los Angeles.

The regular GUNS N' ROSES drummer for a number of years has been Frank Ferrer, who is also part of the current lineup that boasts classic lineup members Axl Rose, Slash and Duff McKagan.

In a May 2017 interview, Adler stated about his onstage reunion with GUNS N' ROSES the previous year: "That was so great. It was really, really amazing and a dream come true. 'Cause for twenty-five years, all I've been doing was praying that I would be able to do it. I just wish I could play more songs, 'cause I wanna do more with them. It's really hard… it's heartbreaking and hard on me to be standing on the side of the stage and watching somebody else [Frank Ferrer] play my songs. Which, he is great, but it's hard for me. It's, like, I'd like to play a few more songs. But I'm thankful I got to do anything at all, so my dream came true. But I do wanna do more. I hope… We'll see what they say."

Back in February 2017, Adler revealed that he was originally supposed to appear at more than just a handful of shows on the GUNS N' ROSES reunion trek. He said that he expected to sit behind the drum kit for all the "Appetite For Destruction" material during the entire tour, only to be told he was out after he hurt his back during rehearsals. "Duff called me and said, 'Dude, you're not gonna play with us anymore,'" Adler said. "'You're not gonna do these shows.' And I was, like, 'You're the worst fucking person in the world.'"

Adler published an autobiography in 2010, titled "My Appetite for Destruction: Sex, And Drugs, And Guns N' Roses", in which he delved into his depression, suicide attempts, drug-related heart attacks, and the debilitating stroke that left him with muscular paralysis and permanently slurred speech.