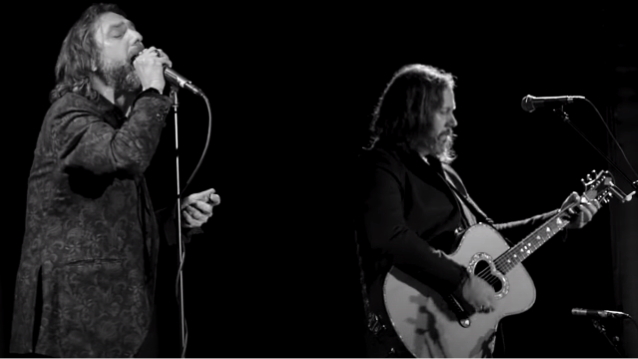 Professionally filmed video of Chris Robinson and Rich Robinson performing three THE BLACK CROWES classics at the San Francisco stop of their "Brothers Of A Feather" acoustic tour on March 6 can be seen below.

The clip, which was directed by Matthew Max Mendenhall and Jon Cornick, includes the Robinson brothers' performances of "Hotel Illness" from THE BLACK CROWES' sophomore studio album, "The Southern Harmony And Musical Companion"; "The Garden Gate" from "Before The Frost…Until The Freeze"; and "Wiser Time" from "Amorica".

The "Brothers Of A Feather" tour saw Chris and Rich performing all-acoustic THE BLACK CROWES tunes at intimate venues and was meant to serve as a warm-up for this summer's THE BLACK CROWES tour in celebration of the group's 1990 debut album "Shake Your Money Maker".

The official THE BLACK CROWES tour is slated to kick off properly on June 17 at Austin's Austin360 Amphitheater in Austin wrap on September 19 at the Forum in L.A. However, due to the coronavirus pandemic that is sweeping the globe, the trek will almost certainly be postponed.