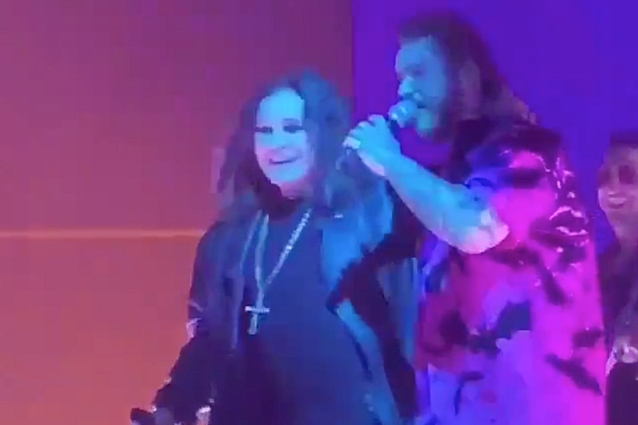 Last night (Thursday, November 21), Ozzy Osbourne surprised a sold-out audience at the Forum in Los Angeles, when he joined Post Malone for the first-ever live rendition of their record-breaking collaboration "Take What You Want". This Sunday (November 24), Ozzy reconvenes with Post and Travis Scott at the American Music Awards for the first television performance of the song in what promises to be another unforgettable display.

"Take What You Want", which debuted on the Billboard Hot 100 chart at No. 8, marked Osbourne's first Hot 100 top 10 in over 30 years, as the BLACK SABBATH singer broke the record for the most time between top 10s in the chart's 61-year history. The song appears on Post Malone's new LP "Hollywood's Bleeding", which landed at No. 1 on the Billboard 200 albums chart.

The 2019 American Music Awards, hosted by Ciara, will air live from the Microsoft Theater in Los Angeles on November 24 at 8 p.m. ET on ABC.

Watt, who produced Ozzy's new studio album, connected with Osbourne after meeting Ozzy's daughter Kelly at a friend's party and pitching her on the idea of Post and Ozzy collaborating together.

"Hollywood's Bleeding" is the follow-up to Post Malone's 2018 album "Beerbongs & Bentleys". That record topped the Billboard 200 albums chart in May of last year. The same month, streaming service Spotify said the LP had broken the first-week streaming record, with more than 236 million streams in the United States and more than 411 million worldwide.

Earlier this year, Malone (whose real name is Austin Post) earned four Grammy nominations, including album of the year for "Beerbongs & Bentleys".