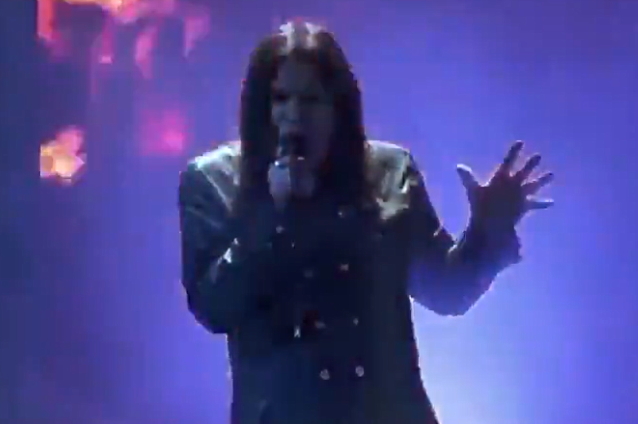 Malone opened the performance solo with a rendition of "Circles" before enlisting Osbourne and Scott for the "Hollywood's Bleeding" album track, with Ozzy sitting perched on a chair for much of the song.

Three days before his American Music Awards appearance, Ozzy joined Post Malone onstage at a show at the Forum in Los Angeles to perform the same song. The performance marked the first time Ozzy stepped on stage since a New Year's Eve performance nearly a year ago.

"Take What You Want", which debuted on the Billboard Hot 100 chart at No. 8, marked Osbourne's first Hot 100 top 10 in over 30 years, as the BLACK SABBATH singer broke the record for the most time between top 10s in the chart's 61-year history.

The 2019 American Music Awards, hosted by Ciara, are airing live from the Microsoft Theater in Los Angeles on ABC.

One of Post's producers, Andrew Watt, connected with Osbourne after meeting Ozzy's daughter Kelly at a friend's party and pitching her on the idea of Post and Ozzy collaborating together.

"Post has been a huge Ozzy fan since he was a kid," Louis Bell, who co-produced the song with Watt, told Billboard. "This was definitely a dream come true for him."

"The culture of metal music and hip-hop are very related," said Watt. "You see kids going fucking crazy at a Travis show, moshing, losing their minds — the same thing they were doing at Ozzy shows. This record in a weird way connects the culture of a kid at a hip-hop show wearing a METALLICA shirt.”

"Ozzy continues to remind the world why he's the superstar he is," added Bell. "This just continues to show people how impactful he is on music and the culture."