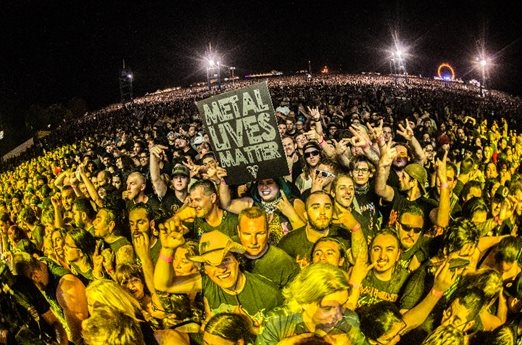 Rolling Stone has uploaded a six-minute video clip in which rowdy fans bond, headbang and praise the undying spirit of metal in the parking lot of Ozzfest Meets Knotfest, which was held September 24-25 a at San Manuel Amphitheater in Devore, California. Check it out below.

SABBATH singer Ozzy Osbourne and bassist Geezer Butler were asked what they thought such a massive show said about the state of rock music. "I don't know about the state of rock music, but I'm just gonna go up there and have some fun, you know," Ozzy said. "We're not trying to make a statement to the industry, we're just gonna have some fun." Geezer added: "It's good that we're still going and this kind of music's still going. To do something this big proves that it's still as popular as ever."

"Ozzfest was just the perfect way for BLACK SABBATH to say farewell to the fans in Southern California," said Sharon Osbourne. "Being there made Ozzy and I realize how much we missed having Ozzfest and we want to thank all of the fans for being so loyal. Also a big thank you to all of the bands who performed some incredible sets."

Saturday's show was the last ever for BLACK SABBATH in California. The band is in the final months of its farewell tour and will play three more U.S. shows in Texas this November before visiting South America. The legendary act will end its run with a series of U.K. gigs in early 2017.

Ozzfest started 20 years ago and was the first national music festival of its kind dedicated to hard rock music.