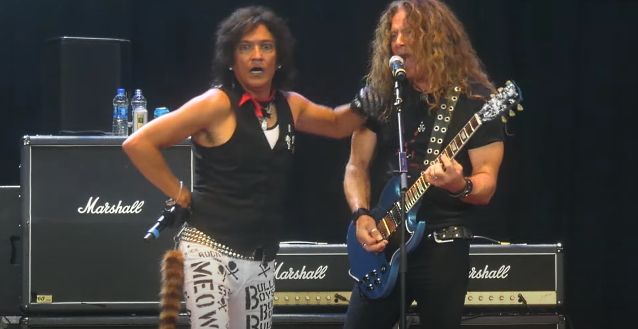 Video footage of the reunited original lineup of BULLETBOYS performing on July 3 at the M3 Rock Festival at the Merriweather Post Pavilion in Columbia, Maryland can be seen below.

The original BULLETBOYS lineup made its live return in December 2019 with a sold-out performance at the Whisky A Go Go in West Hollywood, California.

Aside from one show in 2011, BULLETBOYS — featuring Marq Torien (vocals), Jimmy D'Anda (drums), Mick Sweda (guitar) and Lonnie Vencent (bass) — had not performed together since 1993.

During an appearance on an episode of the "Appetite For Distortion" podcast, Torien confirmed that the BULLETBOYS are putting together ideas for a new record. "We've been working on nothing but new music," he said. "So we're diligently writing right now. I've kind of put myself away — not talking on the phone, not going out; just diligently working with some stuff.

"This is gonna be such a diverse and really rad record that people have been really expecting from us for a long time," he explained. "We're taking our musical prowess into a completely new direction with just a lot of new ideas and with this recharged energy. I wanted to do something special.

"I hear a lot of music that's out there and I'm fan of so many different bands, and not everybody is really taking risks or taking chances," he added. "So I think we're gonna be trying to do that on this next EP or album that we're writing right now."