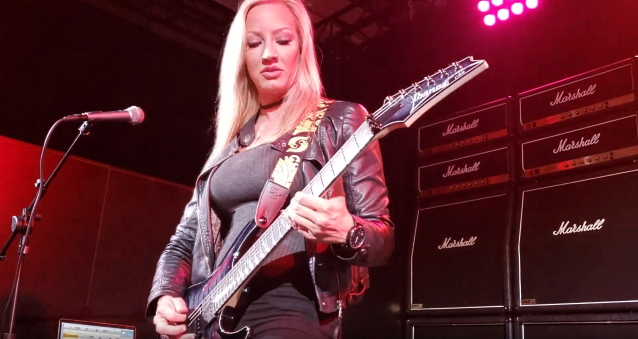 Nita Strauss, the Los Angeles-based guitar shredder for the ALICE COOPER band, was was again in attendance at this year's NAMM convention in Anaheim, California for the launch of the latest additions to the Ibanez Nita Strauss signature JIVA family: the new JIVA X, JIVA10 and JIVA Junior models.

Video footage of Strauss shredding the axe on January 17 during the 2020 NAMM can be seen below (courtesy of YouTube user Clyde Shenefield).

Nita recently admitted that she initially had some reservations about putting out an album of instrumentals with her debut solo LP, 2018's "Controlled Chaos".

"I always thought that instrumental music was for 'better guitar players' than me," she wrote in an Instagram post. "I listened to it, but it took me a long time (and a push from [Steve Vai]) to find the faith in my ability that I could do it. That's a weird thought now that I look back on it, but let's face it — writing music that's essentially all solos is intimidating. It wasn’t until I started writing 'Controlled Chaos' that I realized there was a part of me that NEEDED to express myself that way."

She continued: "An instrumental song is one of the most pure forms of expression. It can be about whatever the listener needs it to be in that moment... just pure emotion, without being restricted by the use of words. I love that about it.

"Carving this new path as a solo artist has truly been one of my most cherished experiences of the decade and I can't wait to see where this second album takes me as I write it."

Nita's second solo LP is tentatively due in late 2020.

The guitarist's live show is mostly instrumental in nature, combining originals with covers.