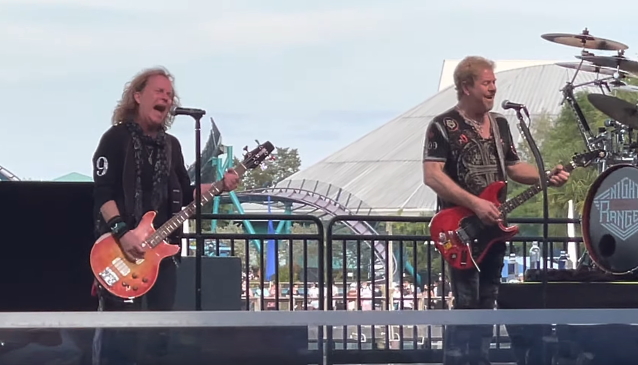 On Saturday, March 27, NIGHT RANGER performed at SeaWorld's Seven Seas Food Festival in Orlando, Florida. Fan-filmed video footage of the concert can be seen below (courtesy of YouTube user "concertsrock").

All theaters and stadiums at SeaWorld Orlando are operating at limited capacity with modified seating to allow for proper physical distancing.

Last fall, NIGHT RANGER commenced the songwriting and recording process for its as-yet-untitled new studio album. Due later this year via Frontiers Music Srl, the LP will be the follow-up to "Don't Let Up", which was released in March 2017.

Songwriting started with the three original members Jack Blades (lead vocals/bass), Kelly Keagy (lead vocals/drums), and Brad Gillis (lead and rhythm guitars) meeting and putting their initial ideas together. The recording then began, with Eric Levy (keyboards) and Keri Kelli (lead and rhythm guitars) joining the process. The plan, subject to change, was to deliver the record to Frontiers in the first few months of 2021 for a tentative summer release.

NIGHT RANGER stated: "What this world needs now is to come together through music and NIGHT RANGER is on it! We are excited to create a new studio album with our great partners at Frontiers Music. Our biggest problem is that we have so many songs, we're trying to figure out which ones to leave off! Rock and Roll baby."

With more than 17 million albums sold worldwide, over 3,000 live shows performed, NIGHT RANGER's popularity is fueled by an impressive string of instantly recognizable hit singles and signature album tracks such as "Sister Christian", "Don't Tell Me You Love Me", "When You Close Your Eyes" and the anthemic "(You Can Still) Rock In America".