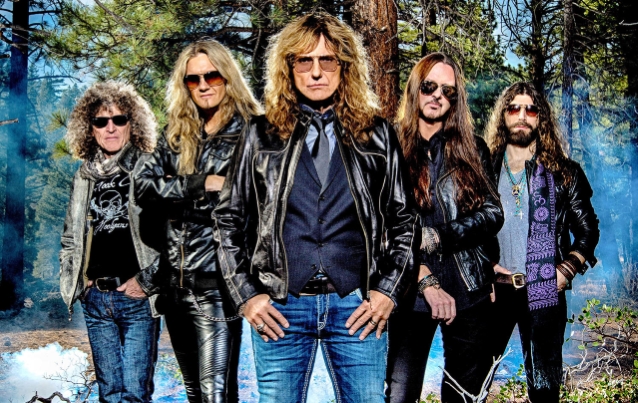 WHITESNAKE's 13th studio album, "Flesh & Blood", will tentatively be released in May via Frontiers Music Srl. A new teaser for the first single and video from the disc, titled "Shut Up & Kiss Me", is available below. The full clip is expected to be posted online on Thursday, February 14.

WHITESNAKE filmed the "Shut Up & Kiss Me" video in March 2018. "It's a kick-ass song; you're gonna love it," singer David Coverdale told SiriusXM's "Trunk Nation". "But there's gonna some real fun elements paying respect and nod to WHITESNAKE's past, but certainly not as dark and as gritty as [WHITESNAKE's] 'Burn' video [from 'The Purple Album']."

Coverdale said that "Flesh & Blood" will "be the best WHITESNAKE album. I know that's clichéd stuff, but I know what I'm talking about. I should do after almost 50 years," he explained.

Coverdale revealed that the recording sessions for the new WHITESNAKE album were halted while he recovered from an illness in 2017. "I got that horrible H3 flu, which took me out for, I think, about six weeks before I started to feel like myself again," he said. "It was horrifying. It was that strain of flu that the anti-flu vaccination didn't cover. It was just an evil, evil, evil strain of flu."

WHITESNAKE spent last summer on the road as part of the "Juke Box Heroes Tour" with FOREIGNER and Jason Bonham.