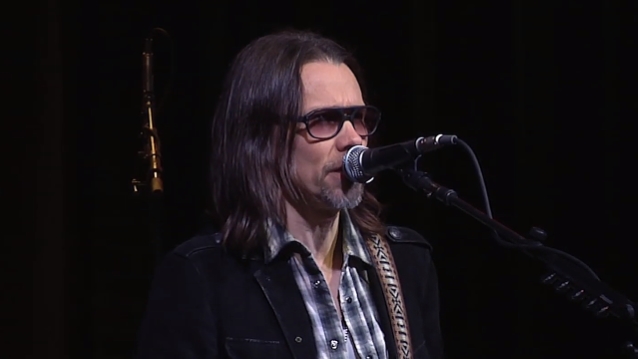 On November 23, iRock Radio captured Myles Kennedy's solo performance at the Webster Theater in Hartford, Connecticut. Watch the footage below.

Kennedy's debut solo album, "Year Of The Tiger", was released in March. On the disc, Myles embarked on his first venture as a solo artist by embracing musical elements and influences he hadn't explored previously in his career. Kennedy himself played banjo, lap steel, bass, and mandolin in addition to guitar throughout the album. The emotional journey and personal story of Myles is captured in a bluesy Americana album with a twist of country and rock, swirling and flowing around the incredible, soulful voice that the world has come to know.

Myles told the "Nothing Shocking" podcast about the songwriting process for "Year Of The Tiger": "I knew what I didn't want to do, stylistically, was make another hard rock record, because I already have the luxury of playing in these two bands that have established a legacy and have put out multiple records, so to put out another album that just sounded the same, to me, I wasn't taking advantage of the opportunity of making a solo record in that case. I felt like it would dilute what I'm doing with the other projects. This was a really great opportunity for me to do something different, to challenge myself and make music that hopefully will really just kind of push me."

Myles, not one to spend a lot of time at home, is touring the U.S. in support of "Year Of The Tiger". The 18-date run kicked off on November 13 in Chicago, Illinois and will wrap on December 16 in Seattle, Washington. The performances feature music from the album as well as selections from Myles's work with ALTER BRIDGE, THE MAYFIELD FOUR and SLASH FEATURING MYLES KENNEDY AND THE CONSPIRATORS. WALKING PAPERS is opening all dates.