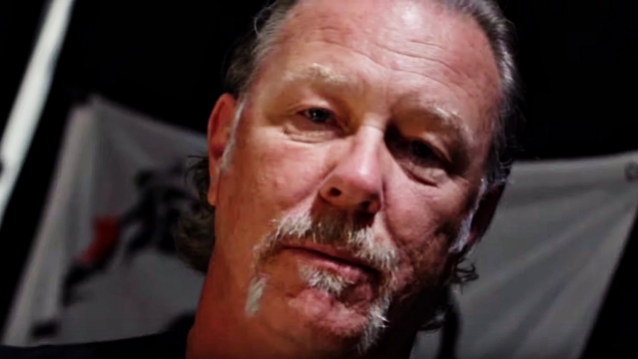 As one of the greatest riff masters of all time, METALLICA's James Hetfield needs gear that performs as monstrously as he does — picks included. When he came to Dunlop looking for a pick to meet his high standards, the company worked closely with him to create a solution that keeps up with and even enhances his performance.

Dunlop used the Flow Standard Pick 1.0mm as its starting point. The thrash titan put it through a full battery of tests on the road and came back to the company with the tweaks and adjustments he needed to make it just right. First, Dunlop incorporated the Black Fang Pick's blended beveled edges for a super-snappy attack that rings out with bright articulation, ensuring that every note and chord makes an impact through all that speed and gain. Next, Dunlop made it a bit heavier, going to 1.14mm — not normally available in the standard Flow Pick line — for the perfect balance between mass and articulation. Lastly, Dunlop enhanced the grip, creating a custom pattern so that the pick stays put when Hetfield digs in.

"The White Fang Pick has amazing grip when sweating from heavy riffing, and a smaller profile to go faster," James says. "Plus, the white is easier to see when they get thrown into the crowd."

Asked by Guitarist magazine how he developed the strength and speed that his down-picking playing style requires, Hetfield said: "It was always a kind of contest — who could down-pick the fastest — and mostly it was a battle between me and Lars [Ulrich, drums], actually. It's a hard thing to do well, because your timing has got to be dead on. If you're playing eighth or sixteenth notes, then you've got to get cooking. A lot of practice is called for to build up your strength."

Engineer and producer Flemming Rasmussen, who worked with METALLICA on most of the band's early albums, said: "James is extremely exact. He's the best rhythm guitar player in the world, by a mile. There's no one better than him when it comes to down-picking. It's unbelievable. He'll do eight tracks and it'll sound like one guitar."