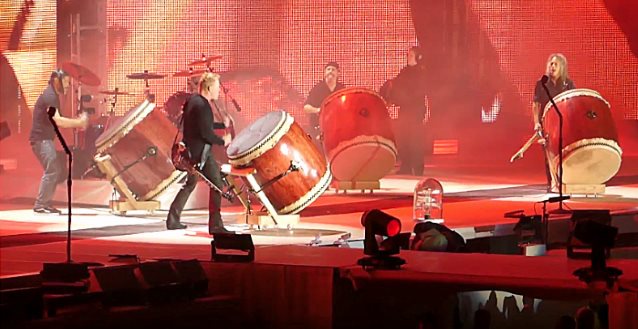 METALLICA played its first concert in Philadelphia, Pennsylvania since 2009 Friday night (May 12) at Lincoln Financial Field. The two-hour show included a four-man drum jam that first made an appearance at METALLICA's Mexico City gigs in March within the new song "Now That We're Dead". During the section where drummer Lars Ulrich, from the back of the stage, played some tribal tom grooves, the other members started banging on individual sets of toms, with Ulrich coming out to join them.

"I know it's been on [frontman James] Hetfield's laundry list for some time to experiment with a drum piece," Ulrich told Newsday. "He's always been a bit of a closet drummer, so he suggested that we all somehow stitch together a drum interlude."

METALLICA's setlist for last night's show was as follows:

METALLICA is touring in support of its latest album, "Hardwired… To Self-Destruct", which came out last November.

Hetfield told The Pulse Of Radio a while back that he still recalls METALLICA's very first gig, with original lead guitarist Dave Mustaine. "First METALLICA show was at Radio City in Anaheim," he said. "I remember the first song we played, Dave broke a string, and I was stranded up there. I was just singing, I wasn't playing guitar back then, and I was so uncomfortable, I was like, 'So, how's it going...' There were about 200 people. You know, your first gig, everyone shows up. Second gig, there's about 20, you know. [Laughs]"

The North American run will hit stadiums in 23 more cities before ending in mid-August. Ulrich told Rolling Stone that the band was genuinely surprised to learn they could still play stadiums, saying, "It was like, 'Holy fuck, people really still care about this band in ways that you stopped taking for granted literally decades ago. It was very inspiring and kind of eye-opening."

The next stop on the tour is MetLife Stadium in East Rutherford, New Jersey on Sunday (May 14).

The band is joined on most of the trek by VOLBEAT and AVENGED SEVENFOLD.

AVENGED SEVENFOLD was forced to miss last night's concert in Philadelphia after the band's guitarist, Synyster Gates, flew home to be with his wife, who unexpectedly went into early labor with the birth of their first child.