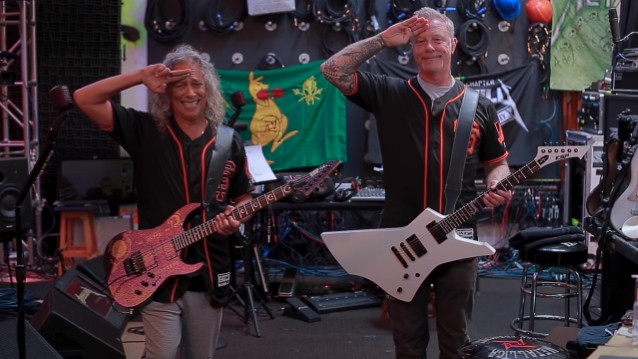 METALLICA's James Hetfield and Kirk Hammett virtually performed "The Star-Spangled Banner" before the September 23 baseball game featuring the San Francisco Giants and the Colorado Rockies. Video of their performance can be seen below.

Wednesday's rendition of the U.S. national anthem marked the eighth consecutive season that METALLICA played the song before a Giants home game. This year, due to the coronavirus pandemic, Hetfield and Hammett provided the performance via a pre-recorded video.

"They're always a pleasure. Come on, to be able to support a hometown team in the best possible way, it's a huge honor," Hammett said in an interview with former Giant and noted METALLICA fan George Kontos. "And also to be able to play the national anthem for a hometown team, that's just beyond huge. As a native San Franciscan, the honor to be a civil servant for San Francisco cannot be higher for me to play the national anthem with James for the Giants."

Hammett previously told ESPN.com that he feels the version of the national anthem he plays is "really unique and different," and it's great that he can play it for his home team and hometown audience.