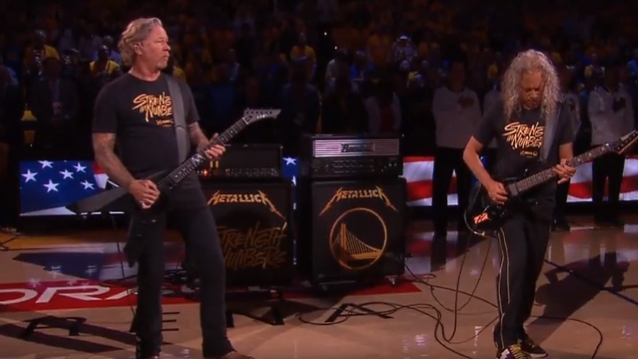 METALLICA guitarists James Hetfield and Kirk Hammett performed the U.S. national anthem before tip-off earlier today (Wednesday, June 5) as the Golden State Warriors hosted the Toronto Raptors for Game 3 of the N.B.A. finals at Oracle Arena in Oakland, California. The Canadian national anthem was performed by Tenille Arts. The game is being carried on ABC in the U.S. and Sportsnet in Canada.

Video of the METALLICA axemen's performance can be seen below.

Hetfield and Hammett have also performed the anthem before San Francisco Giants baseball games and San Jose Sharks hockey games. Hammett told ESPN.com that he feels the version of the national anthem they perform is "really unique and different."

The pair most recently performed it during the seventh annual "Metallica Night" on April 26 at Oracle Park in San Francisco as the Giants took the field against the New York Yankees. Drummer Lars Ulrich threw out the ceremonial first pitch and the band also announced the team lineups.

METALLICA is currently on a spring/summer European tour that launched on May 1 in Lisbon, Portugal and will visit some 20 countries in total, ending in Mannheim, Germany on August 25.