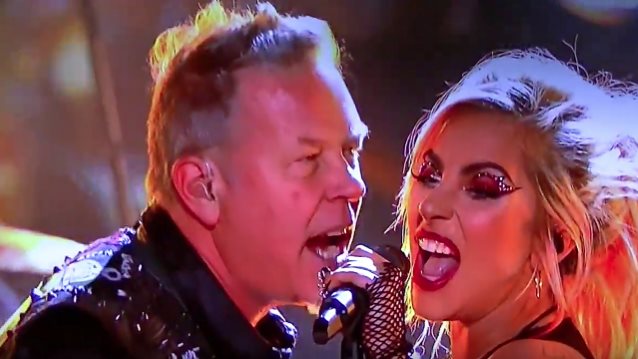 METALLICA performed its song "Moth Into Flame" with pop superstar Lady Gaga earlier tonight (Sunday, February 12) at the 59th annual Grammy Awards at the Staples Center in Los Angeles. After opening with an awkward staged mosh-pit, with Gaga emerging from the crowd of "moshing" backup dancers, it became quickly clear that James Hetfield's microphone wasn't working, visibly frustrating the METALLICA frontman as Gaga carried on performing. To remedy the situation, the two singers shared a mic until his was fixed.

Gaga herself took charge of the performance, which took place in front of gyrating dancers, flashing lights and flames. Gaga even jumped into the audience and briefly crowd-surfed at one point before returning to the stage to close out the song.

At the end of the performance, Hetfield knocked down his mic stand and threw his guitar offstage.

Prior to her appearance with METALLICA, Gaga honored the band by getting a new tattoo — a large moth with skull. She posted a photo of the tattoo on her Instagram and captioned it "The Moth & Metallica," as an apparent homage to "Moth Into Flame".

METALLICA was up for a Grammy for "Best Rock Song" for the track "Hardwired" from its new album, "Hardwired... To Self-Destruct", but lost to the late David Bowie's "Blackstar".

Following the Grammy Awards, METALLICA will play an intimate show later tonight for around 3,000 or so fans at the Hollywood Palladium.

Metallica and Lady Gaga live at the Grammys!

.@ladygaga loves to stage dive. RT if you went head over heels for her #GRAMMYs performance w/ @Metallica pic.twitter.com/wEwHoZFpMm

#JamesHetfield has every right to kick the microphone & throw his guitar! #WrongMicTurnedOff @Metallica #grammys2017 pic.twitter.com/EW9JSLhR8n