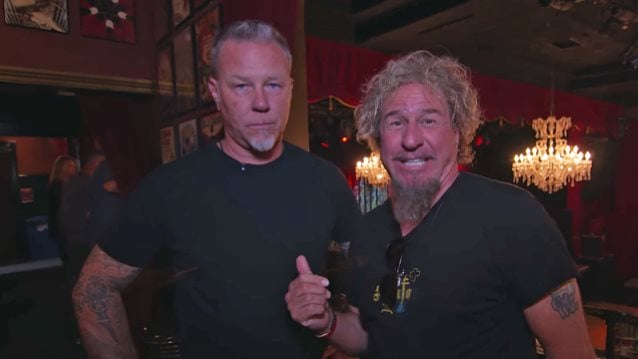 Hit the road with The Red Rocker, as AXS TV presents season two of the popular original music series "Rock & Roll Road Trip With Sammy Hagar", premiering Sunday, March 5 at 9 p.m. ET / 6 p.m. PT. The 12-episode season follows Hagar as he travels to notable music cities throughout the U.S. to interview and jam with some of his legendary friends in music, including John Mayer, John Mellencamp, James Hetfield (METALLICA), Mick Fleetwood, Rick Nielsen (CHEAP TRICK), Joe Satriani, and Melissa Etheridge. Season two is split into six-show cycles and kicks off with a special hour-long premiere. All other episodes will be 30 minutes long. This marks the second consecutive year the network has partnered with Mercury Insurance on "Rock & Roll Road Trip With Sammy Hagar" as the series's title sponsor.

A newly released trailer for season two of "Rock & Roll Road Trip With Sammy Hagar", featuring Hetfield, is available below.

Season two kicks off on March 5 in Hagar and James Hetfield's hometown of San Francisco, where they turn the camera on the star-studded third annual Acoustic-4-A-Cure — the benefit concert they founded. The concert event, at the world-famous Fillmore Theatre, is one of the year's hardest tickets to score and is open to TV audiences for the first time on AXS TV. During the one-hour premiere Hagar interviews Hetfield, Joe Satriani, John Mayer and Melissa Etheridge — leading into epic jams with Hagar, Hetfield, Mayer, Tommy Lee, Satriani, Etheridge, Pat Monahan, Vic Johnson and more.

"This is a different side of entertainment for me," Hagar said. "I shut up and listen now."

"Sammy Hagar is one of rock's most enduring figures, who is not only revered by his fans but by today's headlining performers as well," said Evan Haiman, AXS TV's vice president, music programming and production. "With season two of 'Rock & Roll Road Trip With Sammy Hagar', we give viewers the ultimate backstage pass as more of music's biggest names open up about their lives, legacies, and passions outside of the industry. From classic rock to country, there is truly something here for everyone to enjoy — making this a must-see event for all true music enthusiasts and we're thrilled to be partnering again with Mercury Insurance as sponsor of the popular series."

"Mercury Insurance and AXS TV have partnered on a number of campaigns during the past three years and the 'Rock & Roll Road Trip with Sammy Hagar Presented By Mercury Insurance' has been such a great experience for us," said Erik Thompson, Mercury's advertising director. "Sammy Hagar is an amazing entertainer and it's been absolutely great working with him and the AXS team."

"Something that's always bugged me is that fans get to see us either onstage in concert or in interviews, and that's about it," Hagar said. "There's so much cool, history-making stuff that happens off stage that fans have never really had access to, but I do. And that's where this show takes viewers! I'm hookin' them up with a real backstage pass."