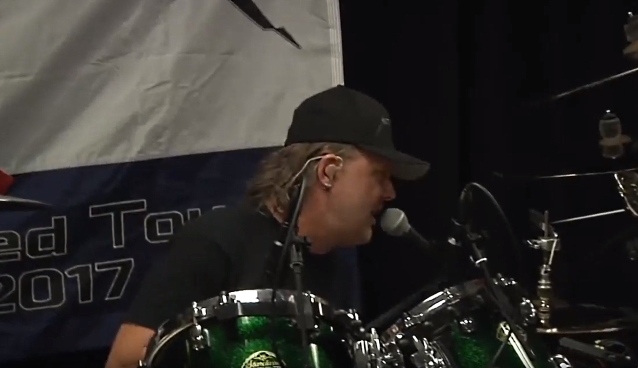 Video footage of METALLICA playing a cover version of the JUDAS PRIEST classic "Delivering The Goods" — with drummer Lars Ulrich on lead vocals — can be seen below. The clip was shot in the METALLICA tuning room before the band's October 18, 2018 concert at PPG Paints Arena in Pittsburgh, Pennsylvania.

Back in 2016, METALLICA's original manager revealed to Metal Hammer magazine that the band briefly considered making Ulrich its frontman.

Jon "Jonny Z" Zazula, who started working with METALLICA before the release of the band's debut album, "Kill 'Em All", recalled James Hetfield's lack of confidence in handling lead vocal duties. As a possible solution, it was suggested that Ulrich could step up from the drum stool to the microphone.

Zazula told Metal Hammer: "Lars and I planned a lot of stuff. But James wasn't the most confident of singers. I don't think he felt comfortable.

"At one point there was even talk of Lars becoming the frontman. For about five seconds."

Other singers who were being considered for the frontman position in METALLICA included Jess Cox of Newcastle, England's TYGERS OF PAN TANG and John Bush of ARMORED SAINT (and later ANTHRAX), who actually turned the offer down.

In a 1989 interview with Metal Forces, Ulrich talked about what METALLICA could have sounded like had Bush ended up fronting the group. He said: "Only a couple of days ago, we were actually sitting around talking about how it would be now if John Bush had joined the band. Obviously, it's impossible to know how different it would have been, but I can't imagine METALLICA without James Hetfield up there growling into the microphone, fucking curved over and everything. It's really weird to think about it. I mean, nothing against John Bush — I think he's a great vocalist — but ... Well, thank God it didn't happen."