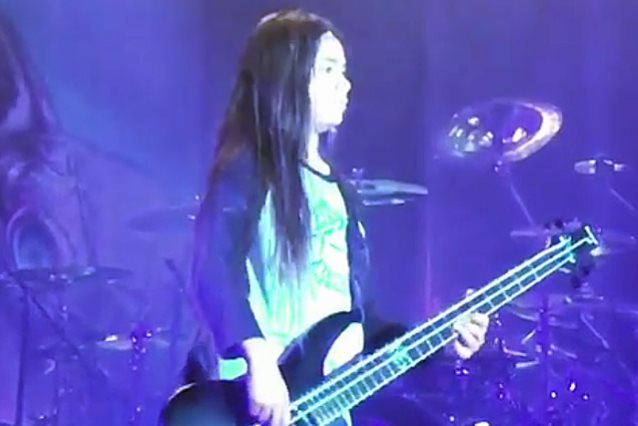 Tye Trujillo, the 12-year old son of METALLICA's Robert Trujillo and member of NorCal group THE HELMETS, made his live debut with KORN last night (Monday, April 17) at Gran Carpa de las Américas in Bogota, Colombia. Fan-filmd video footage of the concert can be seen below.

The 52-year-old METALLICA bassist told The Huffington Post about Tye: "My son is an amazing bass player and a really great writer. The bass lines that he's writing and the riffs, I'm like, 'Man, I wish I had written that.' He's coming up with stuff on his own, but he's also been influenced by players like Jaco Pastorius, but also Miles Davis or BLACK SABBATH or LED ZEPPELIN. We even listen to bands like QUEENS OF THE STONE AGE and TOOL. He's like a sponge. He loves funk. He loves James Brown, he's this little 12-year-old who's soaking up and embracing all this different music and I can tell that it's helping him creatively in what he's writing with his band."

Tye reportedly started picking up the guitar when he was about six or seven years old. "He's great. He has his own ideas, and if I help him through a song, it's usually with arranging," Robert told Today Online. "It's a beautiful thing to see him confident in what he does... and when he has an exciting idea. It makes me happy. I am always there to advise him, but it's perfect because the strength of the songs he writes are the strength of his ideas."

THE HELMETS cite their influences as TOOL, ALICE IN CHAINS and METALLICA. And they're quite vocal about their hatred of pop music.

"We hate pop, we despise it," Tye Trujillo told Billboard last year. "It's all the same sound."