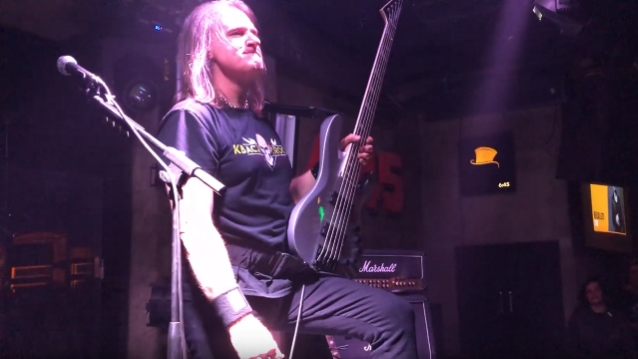 Video footage of MEGADETH bassist David Ellefson's March 12 appearance at 6:45 in Ankara, Turkey can be seen below. The gig was part of Ellefson's "Basstory" tour, which combines solo bass performance with David's celebrated brand of storytelling, as he recounts intimate details of his struggles and triumphs in the name of rock 'n' roll. "Basstory" also includes special VIP meet-and-greets, exclusive merchandise, and more.

Prior to the start of the tour, Ellefson said: "I have always done clinics, and a few years ago did an amazing spoken-word tour in Australia to support my book 'My Life With Deth', and have always welcomed the opportunity to be able to meet and connect with fans on a more intimate level. These important parts of my professional life converged to create 'Basstory'. Not only will fans get to hear some of their favorite bass riffs, but the stories behind them. It's not often I get to get into small, intimate rock clubs, the way this all started, and I'm excited for fans to get to experience this show."

Asked what he wished someone had told him before he embarked on a career in music, Ellefson told ACM: "How difficult people are gonna be. Being around artists is not always easy, and I think, as a bass player, I get to do a little bit of both — I get to be an artist myself in certain situations, and then, other times, I'm there to just play bass for the song someone else wrote. So I think probably, as a bass player, and it speaks probably well to my personality, which is why I think the bass chose me — I didn't choose the bass; somehow the bass found me in the universe and said, 'You're gonna do this, young man' — is oftentimes my role in a band and in a musical setting is to sort of be the cohesive one to bring things together and make thing fit. From the very beginning, roles were cast, and because I was there in the beginning with Dave [Mustaine, MEGADETH leader], I understood those roles. And I think that's probably why I've been there all these years — 35 years of MEGADETH."

As previously reported, Ellefson will release "Sleeping Giants" on July 5 via Combat Records. With cover art by Melody Myers (ALTITUDES AND ATTITUDE, MARC RIZZO, ESCAPE THE FATE), it will be a retrospective featuring several new tracks recorded by Ellefson and Hazaert, plus a collection of demos, and unreleased material, from F5 and David's other projects, including the unreleased demo "If You Were God", featuring John Bush (ANTHRAX, ARMORED SAINT), plus several unreleased demos featuring HOUSE OF LORDS and GIUFFRIA vocalist David Glen Eisley. The CD version will also include a second bonus disc, featuring a compilation of EMP and Combat Records artists. 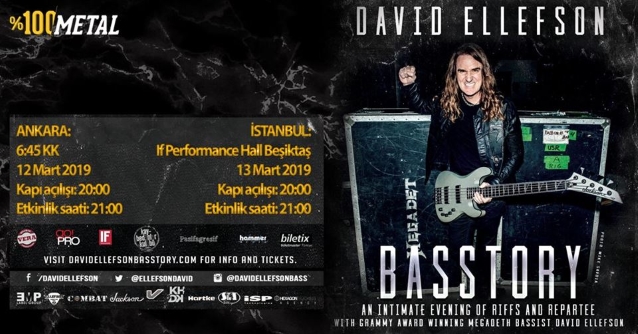