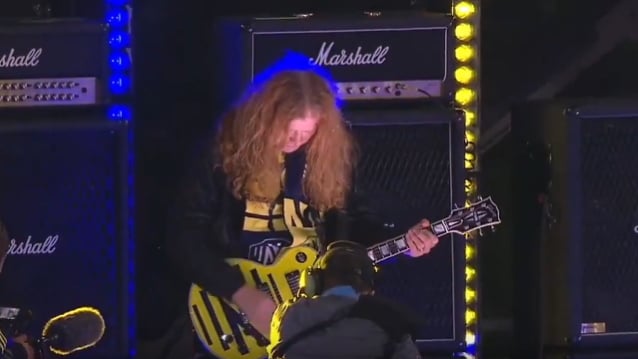 MEGADETH's Dave Mustaine made an appearance at Nissan Stadium in Nashville, Tennesseee on Saturday, April 17 prior to Nashville SC's kick-off game of its 2021 MLS season against FC Cincinnati.

Mustaine performed the Gibson Guitar Riff — a pregame ritual that sees different performers throughout the season get the home fans pumped up by shredding a customized Gibson guitar right before kickoff.

Earlier today, Mustaine shared a backstage photo of him taken at the game, and he included the following message :"Thank you @NashvilleSC for a great game and inviting me to perform on the Gibson NSC Riff Guitar to open your first match of the season."

In February, Gibson officially announced a new partnership with Mustaine, who joined the company as a Brand Ambassador. The new Dave Mustaine Collection will span acoustic and electric guitars across Gibson, Epiphone and Kramer.

Ranked No. 1 by Joel McIver in "The 100 Greatest Metal Guitarists" book, Mustaine godfathered fast-heavy-metal guitar generations, first as the original lead guitarist for METALLICA, and then as the founder of legendary MEGADETH.

In 1983, Mustaine founded MEGADETH, and the band released its first album two years later, established Dave and his bandmates as pioneers in the thrash metal movement. The band has since sold 38 million albums worldwide, including five consecutive platinum or multi-platinum albums in the U.S., while garnering 12 Grammy nominations. MEGADETH also landed a 2017 Grammy for "Best Metal Performance" for "Dystopia", the title track of the band's 2016 album.

Prior to MEGADETH, Mustaine was an early member of METALLICA. Before leaving the band in 1983, he had co-written a half dozen songs that would appear on METALLICA's first two albums.

In the video game arena, Mustaine composed the Grammy-nominated MEGADETH track "Sudden Death" for the 2010 release "Guitar Hero: Warriors Of Rock". The game also featured two other Mustaine-composed MEGADETH songs: 1990's "Holy Wars… The Punishment Due" and 2009's "This Day We Fight!"

MEGADETH is currently working on its 16th studio album.