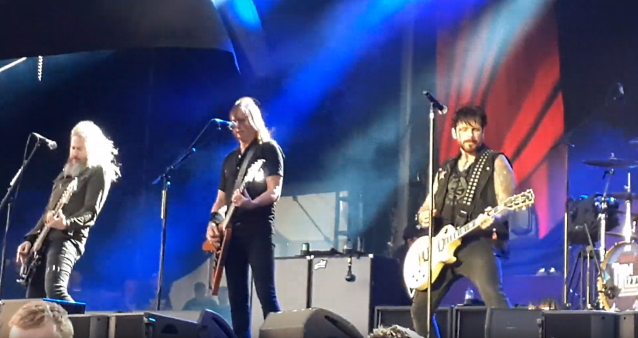 Troy Sanders from Atlanta progressive metallers MASTODON played bass for iconic rockers THIN LIZZY during their recent run of European festival appearances to commemorate 50 years since the formation of the original band and 40 years since the release of the seminal "Black Rose" album.

Earlier this year, when Sanders' addition to THIN LIZZY's touring lineup was first announced, Gorham said: "We are very happy to welcome Troy to the LIZZY family! We met a few years ago at Download festival and he's a great guy and killer bass player to boot, so very happy he wanted to join us for the shows this summer."

Warwick added: "MASTODON are a fantastic band and knowing how much of a THIN LIZZY fan Troy is, he will be an amazing addition to the fold"

Sanders stated: "It's no secret that THIN LIZZY has had a big influence on MASTODON's music. Being asked to join them on stage is a big deal and true honor to me. I am really looking forward to it!"