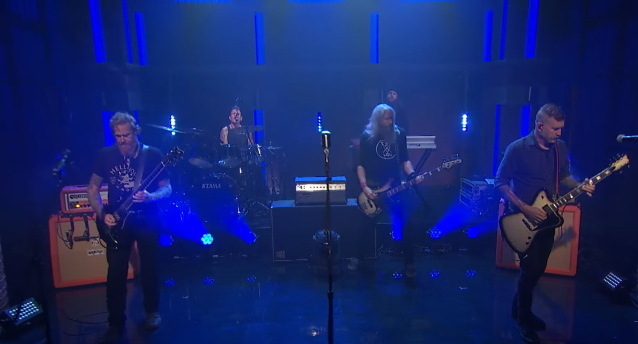 "Teardrinker" is taken from MASTODON's latest album, "Hushed And Grim", which came out on October 29. The follow-up to 2017's "Emperor Of Sand" was recorded at West End Sound, which is located inside of Ember City, the rehearsal facility that members of MASTODON manage in Atlanta. Helming the effort was Grammy-winning producer/mixer/engineer David Bottrill, who has previously worked with MUSE, DREAM THEATER and TOOL, among many others.

The "Hushed And Grim" artwork was created by longtime MASTODON collaborator Paul Romano, who also designed the sleeves for "Crack The Skye", "Blood Mountain", "Leviathan" and more.

MASTODON drummer and vocalist Brann Dailor recently told NME about the band's musical approach on "Hushed And Grim" following their Grammy win: "There were no conversations about what something's going to sound like or what we're going to do. It's all a knee-jerk reaction. Sure, we'll sit in the studio and agonize over the arrangements once the songs are written but whatever comes out, comes out."

He continued: "It's funny, being put in the 'Rock' category meant people treated it like we'd leveled up, but for the most part, the Grammys was a fun night. It's cool to get an award knowing Stevie Wonder has the same thing and it means your parents, your grandparents can brag about you down at the hair salon. I guess there's a little bit of validation there, but it didn't put us under any more pressure."