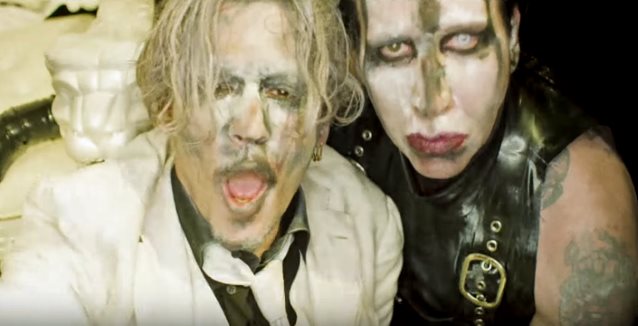 Marilyn Manson's NSFW music video for the song "SAY10" can be seen below. The clip features an appearance by the shock rocker's close friend, actor and fellow musician Johnny Depp.

Manson stated about the video: "After the the balloons have all shriveled up and are swallowed in the puddles of puke and idealism, don't look to Me for sympathy. I am here to be all that I am accused of not being. And to be blamed for what you made Me.

"The shots you will hear are from a mouth disguised as a gun. Don't call this art. This is a hard cock in a room full of vampires and the music, man. The music is My foul blood on your faces."

"SAY10" is taken from Manson's latest album, "Heaven Upside Down", which was released on October 6. On the disc, he reunites with producer and film composer Tyler Bates following an epic collaboration on Manson's critically acclaimed 2015 release, "The Pale Emperor".

Marilyn Manson canceled nine shows of his "Heaven Upside Down" tour following an incident on September 30 when he was injured after a stage prop fell on him while he was playing in New York City.

Manson's next performance is expected to take place on October 15 at Grand Prairie, Texas's Freaker's Ball.

The accident happened about forty-five minutes into Manson's set at Hammerstein Ballroom as tried to climb the prop — consisting of two enormous fake pistols — which was almost double his height. The huge prop toppled and knocked Manson to the stage.