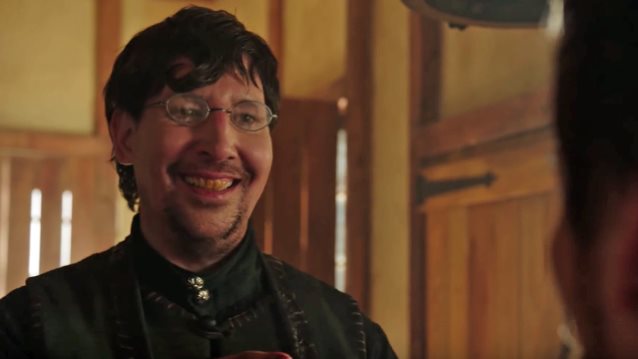 A teaser trailer for third season of "Salem", starring shock rocker Marilyn Manson, is available below.

WGN America's original drama series will premiere Halloween week, Wednesday, November 2. The network also revealed a first-look photo of Manson, who portrays Thomas Dinley, a barber and surgeon who is the go-to man in Salem for everything from a shave and a haircut to being leeched, bled, sliced open or sewn up.

"My character ends up being something that could be called the devil's advocate or the devil's best friend," said Manson, who also wrote the show's opening theme song "Cupid Carries A Gun" with composer Tyler Bates.

The third season of "Salem" dawns with the triumph of the witches' plan to remake the New World by bringing the devil to earth and making Salem his capital. But the devil is a liar, and instead of a New World free from murderous Puritan hypocrisy, his own plan will bring nothing but death and slavery with the ultimate aim of leading humanity to destroy itself. And there's only one person on earth who can beat the devil — the very witch that birthed him, his mother, Mary Sibley. The only problem is — she's dead. Or is she?

Created and written by Brannon Braga and Adam Simon, "Salem" is executive produced by Braga, Simon, Kelly Souders, Brian Peterson and The Firm's Jeff Kwatinetz and Josh Barry. The series is produced by Fox 21 Television Studios.