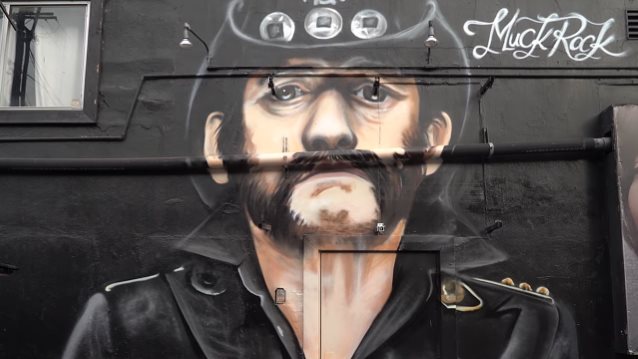 Lemmy's Lounge at the outdoor patio at the world-famous Rainbow Bar & Grill on L.A.'s Sunset Strip, just got a very big addition… a 20-foot-high mural of the man himself.

Already situated in Lemmy's Lounge is a bronze statue immortalizing the MOTÖRHEAD singer. The life-size sculpture — based on a famous Lemmy photograph by Robert John — features shades of black and metallic bronze throughout, with detailed lines and strategic crevices capturing Kilmister's familiar features, from his bristly whiskers to his infamous moles to his signature hat and boots.

The statue, built from a successful crowdfunding campaign, was placed where Lemmy could frequently be found at his favorite hangout when he was in town. Artist Matt Glenn handled the project, using the proceeds from the campaign for materials and donating the rest to cancer research.

In memory of rock's greatest frontman, the patio where Lemmy spent most of his life when not on the road or in the studio was dedicated to him by naming this area Lemmy's Lounge, thanks to Rainbow owner Mikael Maglieri.

Roxy owner Nic Adler and Paul Tollett of Goldenvoice subsequently agreed to allow the painting of a celebratory mural commemorating the life of Lemmy and MOTÖRHEAD on the side wall of the Roxy, opposite Lemmy's Lounge and statue.

MOTÖRHEAD's management ran a contest seeking a muralist painter to provide their services to paint this immortal artwork in celebration of our fallen hero's life.

The winner was Jules Muck (mural created by Muckrock). Although it was not known at the time she was chosen, there may have been a divine intervention in her selection, as it was later learned that she was born in the same U.K. town as Lemmy, Stoke-on-Trent, Staffordshire. Like Lemmy, she's now adopted Los Angeles as her home.

A 60-second video by Luciano Podcaminsky and edited by Robert Escamilla featuring the making of the mural can be found below.

MOTÖRHEAD manager Todd Singerman said: "This is for the fans. Lemmy would always say, at every show, 'We are MOTÖRHEAD, and we play rock 'n' roll. Don't forget us.' That's my job now." To that end, the statue and mural appear to be only the beginning of a series of plans to honor the band and its beloved frontman. Singerman's current efforts include working on opening another Lemmy's Lounge as well as a museum dedicated to the group.

Said one fan: "Everyone came to give praise and respect to Saint Lemmy, and that is a beautiful thing. The Rainbow is now a rock and roll church."

The band canceled a number of shows two years ago, although they did manage to complete one final European tour on December 11, 2015.

Official mural just outside the Lemmy lounge at RAINBOW BAR AND GRILL. Amazing work by @MUCKROCK, Thank you! pic.twitter.com/yqHjGTlkpa