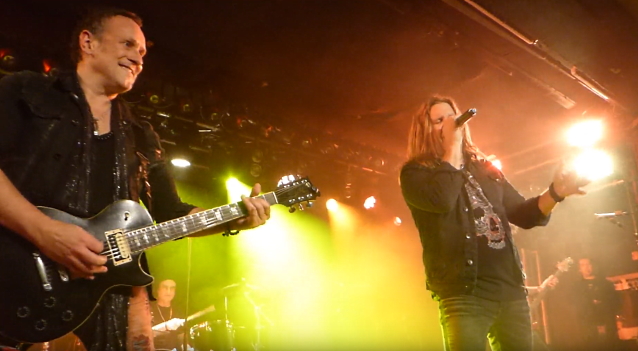 Fan-filmed video footage of LAST IN LINE's December 9 concert at Colos-Saal in Aschaffenburg, Germany can be seen below.

LAST IN LINE guitarist Vivian Campbell revealed in a recent interview with the "Pat's Soundbytes Unplugged" podcast that the band is seeking a new record label home after issuing two albums through Italy's Frontiers Music Srl.

"We are gonna be looking for a new record label, so that's an exciting thing for us," he said. "We've done a couple of records with Frontiers, and we did not renew our contract with them. So we're in negotiations with some major players, so that will be exciting for us — to do a new record and be on a new label and hopefully get more of a global reach. It's all part and parcel of hard work. We've been working very, very hard for the last few years with LAST IN LINE, and it'll be nice to actually take it to the next level."

Asked if LAST IN LINE has considered forming its own record label to release the band's future recordings and make sure the group is compensated properly, Vivian said: "It's not about the money. I mean, there's not a lot of money in records — even for a band like DEF LEPPARD. There's very, very few people who sell a lot of records nowadays. Maybe if you're Adele or someone like that. It's more about getting music to people's ears. That's the hardest part — distributing music and promoting music. And that's the reason to go with an established label.

"In large part, when you're a musician, the music itself is a reward," he continued. "You create something beautiful, and if it means something to people and it resonates with people, then you've done your job.

"We're in a very enterainment-heavy age, with three million television channels and the Internet and everyone's got a smartphone. Everyone kind of focuses on what is of interest to them, and the hardest thing is getting new music to people's ears and making people aware of it and actually getting your music to the kind of people who would wanna hear it. And that's promotion. It can be difficult, it can be challenging, and it's a constantly changing environment. New platforms come along every year or two, and you've gotta kind of adapt. The one thing that will never change is live music. I'm happy to say that's one thing that — you can't package it."

According to Campbell, LAST IN LINE has already composed most of the music that will appear on the band's third album, which, he says, will "expand" on the material that was included on this year's "II" effort.

"I think we're getting very ambitious with our writing, as we did on the 'II' album over the first album, which was 'Heavy Crown', with [late LAST IN LINE bassist] Jimmy [Bain]. Ever since Phil's [Soussan, Jimmy's replacement] been in the band, I think we're stretching more. We're taking some chances; we're experimenting on some stuff. And Andy [Freeman, vocals] is such a flexible writer that he's able to write a melody across sometimes what are very unusual musical progressions. And riffy — more intricate. So we're definitely pushing ourselves. I'd say at this point, we probably have 80 or 90 percent of the music [written] for the record. Obviously, Andy's gotta do a lot of work and write a lot of the melodies and lyrics, but he's very, very quick with that. We were hoping to start the record in January-February."

LAST IN LINE was formed in 2012, when Campbell, Bain and drummer Vinny Appice — Ronnie James Dio's co-conspirators and co-writers on the "Holy Diver", "Last In Line" and "Sacred Heart" albums — teamed up with Freeman. "Heavy Crown" was released in February 2016, landing at No. 1 on Billboard's Heatseekers chart. Initially, the release had been preceded by tragedy when Bain unexpectedly passed away at the age of 68 on January 23, 2016. LAST IN LINE, honoring what they knew would be Bain's wish to keep the band moving, brought in Soussan and committed to sustained touring in support of the album, hitting festivals, headlining clubs, and sharing the stage with metal luminaries such as SAXON and MEGADETH.