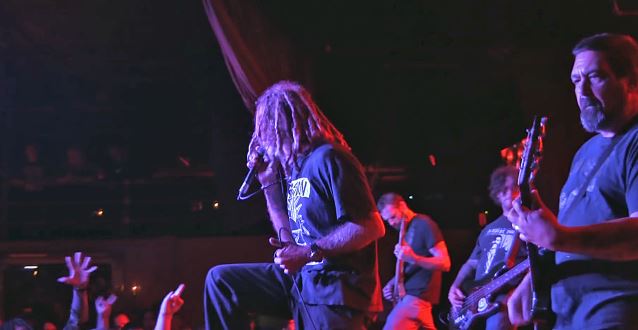 Billy Goate of Doomed & Stoned has uploaded video footage of EYEHATEGOD's October 7 performance at Dante's in Portland, Oregon. Check out the clips below.

As previously reported, LAMB OF GOD's Randy Blythe is filling in for EYEHATEGOD vocalist Mike IX Williams on the latter band's tour with DISCHARGE and TOXIC HOLOCAUST.

Commented Williams: "Once again, rather than cancel an amazing tour, we have chosen for EYEHATEGOD to continue on and give one thousand percent.

Added Blythe: "Anyone who knows me well knows that I am a massive EYEHATEGOD fan. I've seen them play more times than I can remember, my old side project covered 'Dixie Whiskey' for an EYEHATEGOD tribute album, I wear their merch, I even have a freaking EYEHATEGOD tattoo that I got in New Orleans. They are one of my favorite bands of all time, period. I've also been friends with the guys in the band since the '90s... actually, I knew them before I knew the dudes in my own band, and EYEHATEGOD would often crash at my crib when they came through Richmond. So it's a bit difﬁcult for me to say, 'I'm super-happy that I've been asked to ﬁll in for Mike IX Williams on this upcoming tour with DISCHARGE and TOXIC HOLOCAUST.' In fact, I can't honestly say that at all because, once again as a fan and, more importantly, a friend, no one would rather see Mike do this tour more than myself. Mike IX is THE voice of EYEHATEGOD, and I respect him as a friend, musician, and writer way too much to ever think otherwise. What I can say is that I am beyond honored to be serving a brief tour of duty on vocals with EYEHATEGOD for this run.

"In order to both give him the time to take care of his health while simultaneously keeping EYEHATEGOD an active working unit, I'll be proud to do my bit on this tour and take the stage with what is undeniably one of the heaviest bands on earth. It will be a savage experience; I can promise you that. Let the down-to-earth-motherfuckin'-post-ampliﬁcation blues begin! Hail Mike IX."

EYEHATEGOD's journey with DISCHARGE and TOXIC HOLOCAUST commenced on October 6 and will run through October 15, the tour concluding with a one-off show in Chicago with NEGATIVE APPROACH and SVLPHVRVS. 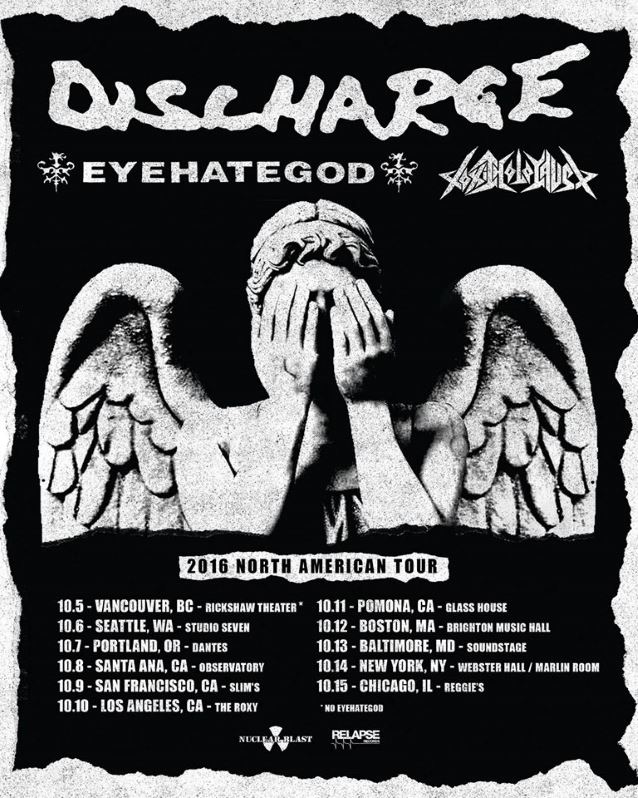