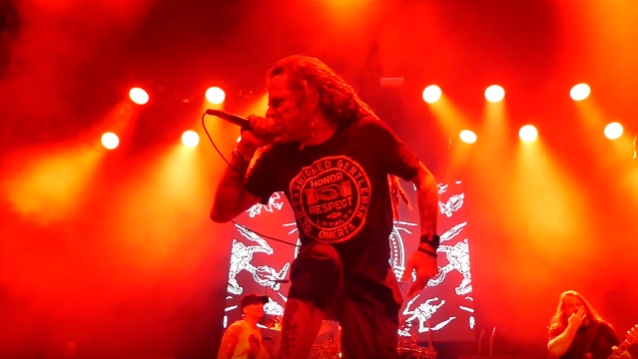 Fan-filmed video footage of LAMB OF GOD's performance aboard the inaugural Megacruise can be seen below (courtesy of YouTube user "Joel Steele").

Megacruise, hosted by metal veterans MEGADETH, departed from Los Angeles on October 13 on a round-trip voyage to San Diego and Ensenada, Mexico and returned on October 18. The at-sea music experience featured additional performances from ANTHRAX, QUEENSRŸCHE, SUICIDAL TENDENCIES, DEATH ANGEL, TESTAMENT, DRAGONFORCE, OVERKILL and CORROSION OF CONFORMITY, among others.

Megacruise offered fans a variety of events and activities that put cruisers up front and center with metal icons from fan and artist photo experiences to intimate morning coffee jams, music clinics to fan and artist sporting competitions and more ways to interact with the lineup.

LAMB OF GOD's latest studio album, "VII: Sturm Und Drang", was released in 2015 to global critial acclaim. The band has since issued the celebrated "The Duke" EP in 2016 as well as the cover album "Legion: XX" under its original name, BURN THE PRIEST, in 2018.