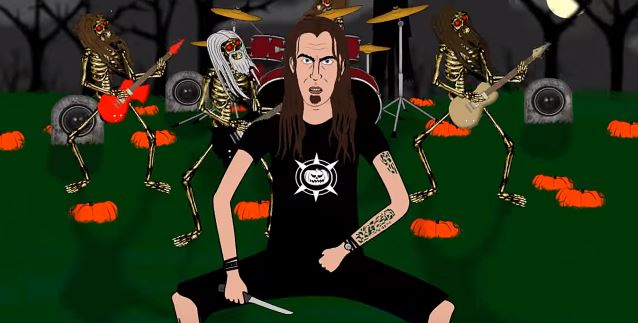 Gainesville, Florida's Joey Siler, creator of the acclaimed "Cooking Hostile" animated series, has put on his Halloween hat for a LAMB OF GOD parody cartoon featuring the band's "Redneck" and "Now You've Got Something to Die For" classics. The music is performed and recorded by Chris Senter. Vocals and sound effects by Scott McKay. Lyrics and animation by Joey Siler.

Siler, who also fronts the PANTERA tribute band GOOD FRIENDS & A BOTTLE OF WHISKEY, gained notoriety with "Cooking Hostile", which was based on a completely off-the-wall premise: PANTERA frontman Philip Anselmo hosting his own cooking show . The program took snippets of some of PANTERA's best-known songs and changed the lyrics to ones that were more cooking-centric.

Other metal- and rock-related videos you can watch on Siler's YouTube channel include the KITTEN IN CHAINS "Cat In The Box" parody along with the first episode of "Secret Metal Mysteries".