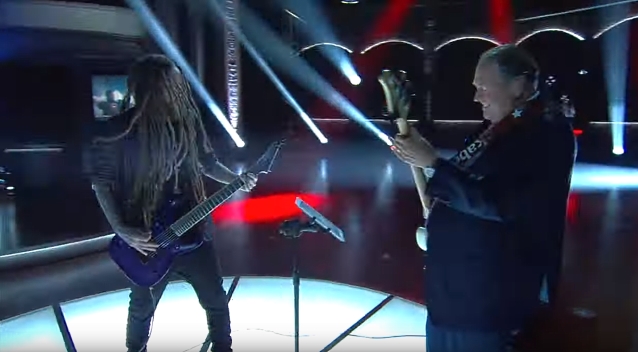 KORN guitarist Brian "Head" Welch and former Arkansas governor Mike Huckabee performed an instrumental version of the KORN classic "Blind" earlier this week when Welch appeared on Huckabee's late-night-style show on TBN. Check out video footage of the jam below.

The former presidential candidate and father of White House press secretary Sarah Huckabee Sanders, Huckabee was the 44th governor of Arkansas. Before becoming a politician and a political commentator, Huckabee was a Christian minister and musician, having played bass guitar since age 12. In recent years, he handled the bass duties in the classic rock cover band CAPITOL OFFENSE. Interestingly, the group's original lineup was drawn from staffers involved in the politics of Little Rock around the time he became governor in 1996.

Huckabee made headlines in April when he claimed that the movement for LGBTQ equality was the "greatest threat" to America's moral fiber. He told The Christian Post: "The biggest threat to biblical principles today is the failure to apply a biblical standard of maleness and femaleness." Huckabee also blamed "the Christian Church" for failing to teach Americans "what biblical marriage should look like." He said: "People are afraid that if they are really biblical, it will alienate people, and I think that's nonsense."