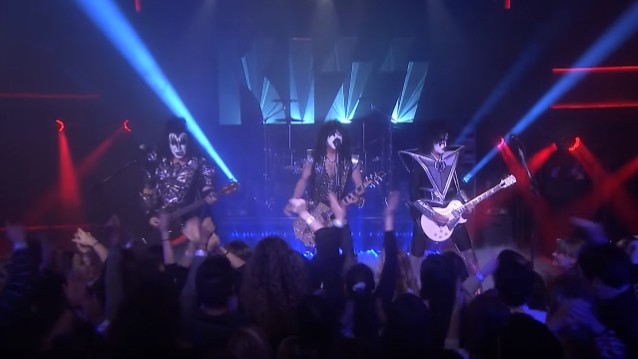 KISS was the musical guest on last night's episode of "The Tonight Show Starring Jimmy Fallon".

The iconic rock band, which will hit the road for a farewell tour early next year, performed "Love Gun" on Tuesday's broadcast.

Video of the performance can be seen below.

KISS announced that it will launch its final tour ever in 2019, appropriately named "End Of The Road". The initial announcement was made a month ago on NBC's "America's Got Talent", and earlier this week, the band revealed the first set of dates and cities in North America, produced by Live Nation. International markets were announced simultaneously.

"When we introduce ourselves for 45 years with you, [you] wanted the best, you got the best, the hottest band in the world. The bar is very high, maybe the highest. We're in competition only with ourselves," bassist/vocalist Gene Simmons added. "We don't wish any ill will to anybody else, but we're too busy being the most fabulous band on planet earth. Look at us. Just one look and you go, 'Wow.'"