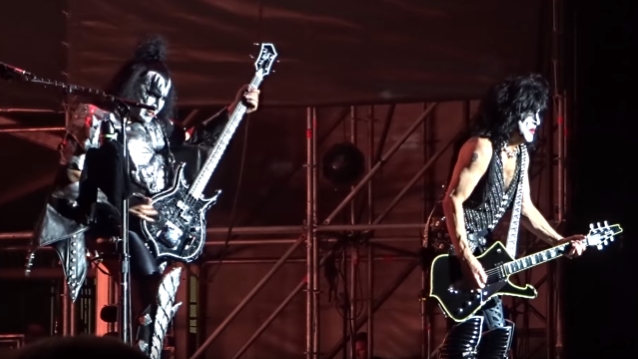 Fan-filmed video footage of KISS's entire June 13 concert in Moscow, Russia can be seen below.

According to Billboard, the first North American leg of KISS's "End Of The Road" tour grossed $58.7 million and sold 518,395 tickets.

The trek kicked off on January 31 in Vancouver and played an additional 42 shows throughout the U.S. and Canada before wrapping up on April 13 in Birmingham, Alabama

All but five dates grossed at least $1 million and all but seven sold at least 10,000 tickets. The tour's biggest showing was at New York's Madison Square Garden on March 27, where KISS grossed $1.947 million and sold 13,359 tickets.

The rest of 2019 will see KISS playing 14 more dates in Europe, an additional 26 in North America, and eight final shows in Australia and New Zealand.

The "End Of The Road" tour — the initial European leg of which began in Leipzig, Germany on May 27 — is expected to continue throughout 2020.