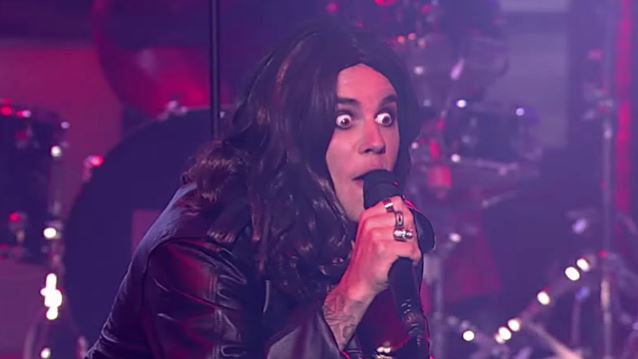 In the preview clip below, Justin gets into full character, looking unrecognizable in a black wig and dark black eyeliner.

Back in January 2011, Bieber and Osbourne teamed up for a Super Bowl TV commercial for home electronics chain Best Buy.

Asked by Esquire magazine in a 2014 interview about some of his notorious rock star shenanigans, particularly when he snorted a line of ants — as mentioned in MÖTLEY CRÜE's "The Dirt" — Ozzy said: "I've got no recollection of snorting those ants, but it beats throwing eggs like Mr. Fucking Bieber!"

Ozzy went on to say: "I heard he pissed in a bucket in some restaurant. So what? I pissed on the Alamo, which is a national shrine. In a woman's dress. At 7 a.m., with a bottle of Courvoisier in one hand, and my dick in the other."