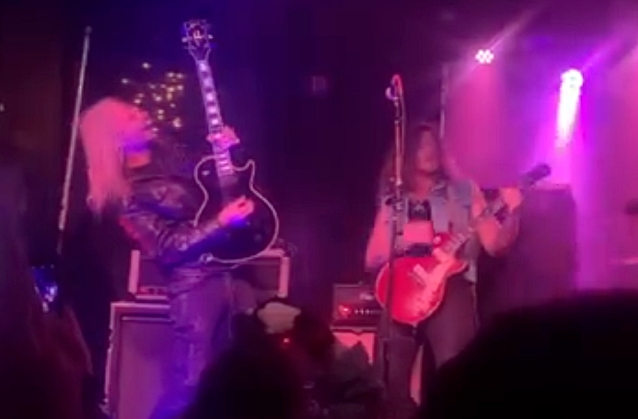 JUDAS PRIEST guitarist Richie Faulkner joined rising guitar hero Jared James Nichols on stage this past Sunday (November 17) at the The Basement East in Nashville, Tennessee for a short jam.

The next day, Faulkner tweeted a photo of the performance and included the following message: "Had a blast last Night in #Nashville, laying down some fury with my brother @jaredjamesnichols. Les Paul's held high and the energy was electric. Thanks to Jared and his band for having me and to @john5official for a master class in shred guitar RHRF DOTF #firepower #bluespower"

Jared's recent single "Nails In The Coffin" was a popular A-listed radio hit on Planet Rock radio. Recorded in Los Angeles, the single was produced and co-written by Mark Jackson and Ian Scott; best known for being the team behind the artist Dorothy and the hit single "The River" by Bishop Briggs.

2019 was a ground-breaking year for Jared as Gibson/Epiphone released his Signature Model Les Paul Custom Guitar along with the release of the Blackstar Amps JJN-20R MKII.

Hailed as one of the most exciting new blues rock guitarists around, Jared has toured Europe with LYNYRD SKYNYRD, followed by an extensive U.K. tour supporting the legendary Glenn Hughes, where he won over critics with across-the-board rave reviews. He also toured with STONE BROKEN and opened the Planet Rock Main Stage at Ramblin' Man Fair in 2017.

Had a blast last Night in #Nashville, laying down some fury with my brother @jaredjamesnichols.
Les Paul’s held high and the energy was electric. Thanks to Jared and his band for having me and to @john5official for a master class in shred guitar RHRF DOTF #firepower #bluespower pic.twitter.com/U4jvUl67PE

Jared Nichols rocked! And Richie Faulkner came out to join him!