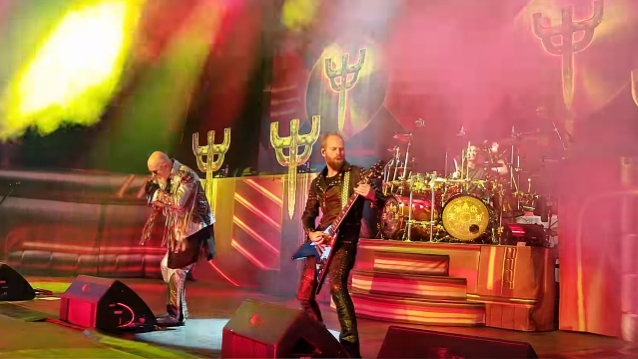 Fan-filmed video footage of JUDAS PRIEST's August 24 performance at the Michigan Lottery Amphitheatre at Freedom Hill in Sterling Heights, Michigan can be seen below (courtesy of Bob Rich).

Longtime JUDAS PRIEST guitarist Glenn Tipton found out he had Parkinson's disease four years ago — after being stricken by the degenerative condition at least half a decade earlier — but only recently announced he was going to sit out touring activities in support of "Firepower". The guitarist, who is now 70 and has performed on every PRIEST LP since the band's 1974 debut set, "Rocka Rolla", is not quitting the band, but simply cannot handle the rigorous challenges of performing live. He is being replaced on the road by "Firepower" producer Andy Sneap, who is also known as the guitar player in NWOBHM revivalists HELL and cult thrashers SABBAT.

All videos courtesy of Bob Rich