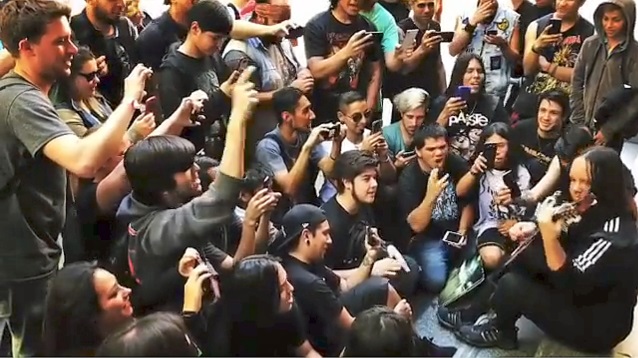 Former SLIPKNOT drummer Joey Jordison performed an impromptu version of the band's classic song "(sic)" with fans outside his hotel in Argentina over the weekend.

Jordison picked up a fan's acoustic guitar and played the track while a group of diehard SLIPKNOT devotees sang the words to the cut that originally appeared on the group's debut album.

The occasion was captured on video and was later posted to Jordison's Instagram account. He wrote in the accompanying caption: "Impromptu jam session w/ a fan's guitar outside my hotel w/ some of the greatest fans in the world!!! #respect #ilovemyfans"

Jordison was in Argentina with his new band VIMIC, which performed at the Monsters Of Rock festival in Buenos Aires on November 4.

Jordison and the members of SLIPKNOT had been silent and evasive about the reasons for his dismissal from the band in December 2013, but Joey finally spoke about it last year while accepting an award at the Metal Hammer Golden Gods Awards in London, England. He revealed that he had been struggling with the career-threatening neurological condition acute transverse myelitis, an inflammation of the spinal cord which damages nerve fibers, which ultimately led to Jordison losing the use of his legs.

Joey last year claimed that he was fired from SLIPKNOT without a band meeting or "anything from management." He said: "All I got was a stupid fucking e-mail saying I was out of the band that I busted my ass my whole life to fucking create. That's exactly what happened and it was hurtful. I didn't deserve that shit after what I'd done and everything I'd been through.

Despite the circumstances surrounding his dismissal from SLIPKNOT, Jordison praised the band's latest album, ".5: The Gray Chapter", which features his replacement, Jay Weinberg, as well as new bassist Alessandro Venturella. He said: "I listened to the whole record multiple times. And I think it's great. It's fucking cool and I'm glad they moved on."

VIMIC's debut album, "Open Your Omen", will be released in early 2018 via Universal Music Enterprises (UMe) and T-Boy Records, UMe's label partnership with rock manager Andy Gould. The disc was produced by Jordison and Kato Khandwala (MY CHEMICAL ROMANCE, THE PRETTY RECKLESS), with mixing and mastering assistance from MEGADETH's Dave Mustaine, who guests on "Open Your Omen"'s first single, "Fail Me (My Temple)".

Impromptu jam session w/ a fan’s guitar outside my hotel w/ some of the greatest fans in the world!!! #respect #ilovemyfans 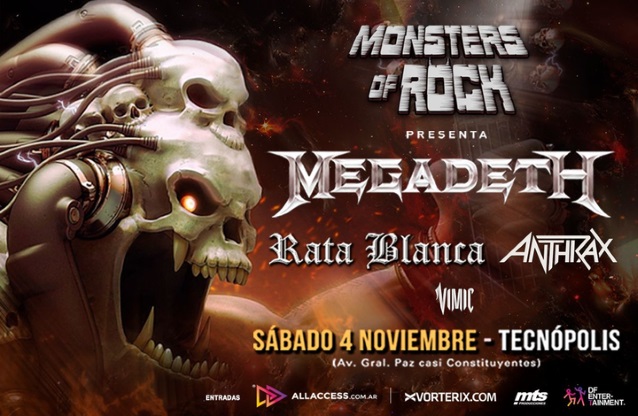